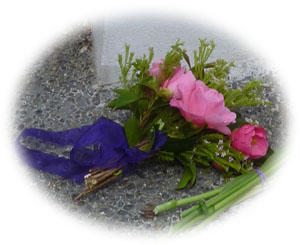 Thank you for taking the time to remember this early pioneer woman and to be present at the unveiling of the plaques to commemorate her. I would like to share with you the story about this woman and the development of this memorial.

When this pioneering woman and her husband came to live here in 1841, there were ancient Maori tracks that wound around and about these hills. The preferred transport in the old days was coastal and by waka or sailing ship. Therefore the ancient tracks followed the coasts and coastal communities or connected people to launching places for their waka and ships. The tracks in this locality connected the waters of Makara, Pitione, Kaiwharawhara and Porirua.

Along our valley there were three places the tracks met. One was as the top of Middleton Road, near St John Church on the Hill one was here in this dell - and it connected with a track over by Glenside Reserve and my house and went over the hills to Pitione, and there was another meeting place of the tracks at Takapu.

So we have these three important connections for travelling along. Linking them together was a foot track that went the length of the valley from what is now Johnsonville, down to Porirua.
In 1840, after the Treaty of Waitangi was signed, the colonial settlers came to live here in the centre of the Glenside valley where the tracks and streams met. The settlers supplemented their food with purchases from the Maori people, who travelled the route from the north, supplying food to the Wellington markets, just as is done today.

The original name for this wider area was Pukehuia, which means hill of the huia bird. When the early settlers came to live here it became known as The Halfway, because it was halfway between Wellington and Porirua. It kept that name until 1928, when a Post Office opened here. As a result of a naming competition the locality was renamed Glenside.

The original subdivisions of land were 100 acres however very early on, in 1841-1842, F Johnson, believed to be Frank Johnson of Johnsonville, sub-divided his block into smaller allotments which resulted in a small community being established in this meeting place of the streams and tracks.

Some of those early settlers are quite well-known. There was Thomas Arnold, who lived on what is now called Glenside Road. He is the son of the headmaster Dr Thomas Arnold of Rugby School in England and wrote letters and books about his time living here. There was William Barnard Rhodes, grandfather of William Barnard Rhodes-Moorhouse, the first airman awarded the Victoria Cross. There were Susannah and Anthony Wall, who provided accommodation for people travelling the route and who in 1847 moved north toward the Pukerua Bay and Porirua area. There was also the McKain family, who managed the Halfway House accommodation and went on to establish the Inn at the river crossing at The Spit, Ahuriri in Napier. There was Sarah Ann Barrow, the first white woman to step ashore from the first migrant ship the Aurora, and of course there is our lady who is buried near here.

Now from the letters written by Susannah Wall back home in 1842 we know that the woman died in the winter. Also, that she died before Susannah and Anthony came to live in the locality. The Walls are believed to have lived on the corner of Glenside and Stebbings Road. (There is archaeological evidence of a pre 1900 house site on that corner).

This places her death in the year 1841. In October 1842, Bishop Selwyn was travelling on foot with his Maori supporters and colleague. They passed through here at four o'clock in the afternoon. Susannah wrote to her sisters in England explaining how she took the deceased woman's husband and the Bishop across to the burial site so that the Bishop could bless the site. She explained that the roads had been so bad when the woman died, that she could not be taken to the burying ground in Wellington.

The Bishop blessed the site and told Susannah that if ever such a thing happened again she was to send for a minister and the Bishop said he would visit Susannah and give books for her children.

There is no doubt that the Maori people travelling with the Bishop would have been present at the blessing. During this time in New Zealand history, from about 1839, Te Rauparaha's relatives had been strongly evangelical, successfully pressing for a Missionary presence and leading the conversion of Maori to Christianity along the Coast and further afield.

So we have this unnamed early pioneer woman, a daughter and a wife, dying in a country far from her ancestors and her wider family leaving her man to make a new life here without her.
Over the years the story of her burial and the blessing by the Bishop was immortalised in the letters of Susannah Wall. The burial site was remembered in oral history. As people moved onto the land the site was left untouched and the actual burial site may well have been forgotten if it wasn't for a farmer, Mr Hodges, who bought the land in 1913. He discovered it when he was fencing. He put a fence around it and planted a shelterbelt of lawsoniana around it.

Glenside residents visited the burial site and looked after it and put flowers on it right up until the late 1950's. Then in the 1960's the Pender family came onto the land and because they were running a commercial business on the farm, people were not encouraged to visit the site. People did not forget though.

When I moved here in 1997 and started writing down the history of Glenside, people told me over and over about the story of the burial site and visiting it as children.

That is why, when Wellington City Council decided to put a road through here, our community objected to it. We did not want the road to go through the burial site. As a result of an Environmental Court Hearing, the Council undertook archaeological investigations to ensure that the burial site was not disturbed by the road construction and were required to build a memorial to honour her memory.

It was a very special day in 2009 when the Reedy family allowed the Vicar of St John Anglican Church and a handful of the elderly residents to come onto the land and bless it with words of peace. Among those present was Ronnie Pender and two who have since passed away, Murray Henderson, whose family lived here on this land from 1886-1901 and passed down the story of sitting on their front verandah in the afternoon sun, looking across at the burial site, and Gwen Silvester nee Rowell, whose family have lived in the locality since the turn of the century and who was born at Ivy Bank Farm down the valley from here in 1920. She put flowers on the burial site when she was growing up.

This is the memorial you see today. It has taken years of discussions and negotiations to get to this beautiful memorial. We first started meeting with Stephen Harte and the Wellington City Council about this memorial in 2008 and now today, we can honour the memory of this pioneer woman by visiting this memorial built in her honour.

(This article may be downloaded as a PDF file here.)