The Glenside Progressive Assn. Inc. has discussed the concept of a milk can sculpture on the milkstand, showing the different sizes of milkcans that were used.

The milkstand is believed to be the most southern milk stand surviving in situ in the North Island. The earliest photograph of the milk stand is dated 1947, however the stand was around earlier than that.

According to former residents, the milkstand was at this site when the Fisher boys were living in The Halfway House between World War I and World War II. Mrs Gwen Silvester (nee Rowell) recalls:

“Where Herb’s Café is today, was a paddock, and at one time it was the boundary for supplying milk to Wellington Town Supply. It was the last paddock north for town supply on the main road. North of that paddock, you could only supply cream. Well, the paddock belonged to the Fisher boys and they took advantage of the fact they could supply Wellington. They grazed 30 to 40 cows on their golf links paddocks. You should have seen the amount of milk that was put out on the stand – supposedly all from that little scruffy paddock beside the main road!”

Several families up Stebbings Road put cream out on the stand. At one time the farmers had a canopy, or cover over it to keep the supply fresh. A number of carriers were used, among them Mexted’s of Tawa.

The Fisher boys established the golf links after the Railway Camp pulled out in 1937 which gives an indication of that the milk-stand at this site might have been in use from 1937 onwards.

This photograph shows Murray Henderson on the milkstand in 1947. 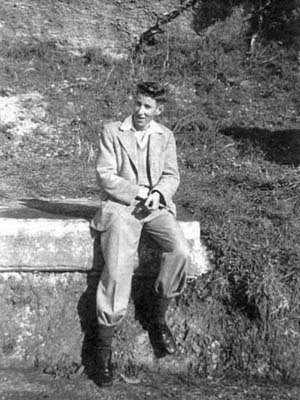