Read here for a quick background about the 1841 burial of an early settler, a woman, who may have died in childbirth. 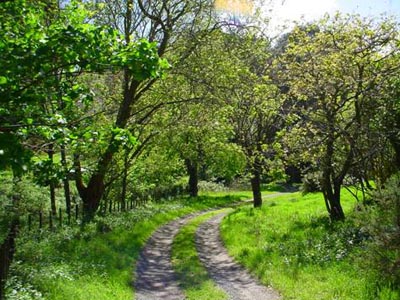 Entrance to old homestead garden of Glenugie. From the front porch of this homestead, the burial site could once be seen.

The country blocks were divided into 100-acre lots and given a section number. The section number identified each 100-acre block for sale. One of these blocks was Section 24, located in The Halfway (later to be called Glenside). Very early on Section 24 was sub-divided into smaller blocks and these smaller blocks were sold to new migrants. One of the migrant families were Susannah and Anthony Wall.

In 1842 Susannah Wall wrote a letter to her sisters in England, describing the burial of a settlers wife the previous winter. She also wrote of the Bishop visiting the burial site and saying a prayer over it. Oral and written lore about this burial site has been passed down through the generations.

After WWI a burial site (assumed to be the same one) was found and a fence put around it. People visited it with flowers. In the late 1950's it became less well known and in time the picket fence surrounding it fell. People still remembered the burial site though, and kept the memory of the early settler buried there "alive" through oral and written history.

In 2007 Wellington City Council purchased part of Section 24 to develop a principal suburban road. In 2008 the Council engaged the Glenside community in discussions to locate the burial site and any other archaeological artefects that might be along the proposed road route.

The burial site was not on the route of the proposed road. However, as part of the Environmental Court outcome in relation to the road, the Wellington City Council designed a memorial to the early pioneer woman buried in the vicinity.