The shrubs and small tree selection was made by studying pre 1900 plant catalogues at Alexander Turnbull Library and by reading books about colonial plantings in New Zealand.

The plants were selected for site specific areas at the Halfway House. For example, we wanted to develop a woodland garden with white scented flowers near the house, and we need plants that can withstand damp soil in a low lying wet area near the rose arbour. We searched for wind hardy plants with a permeable structure to grow along the horse paddock fence line.

Several plants have been gifted as cuttings from gardeners who are able to provide their provenance.

The shrubs and small trees are photographed in the Halfway House garden. 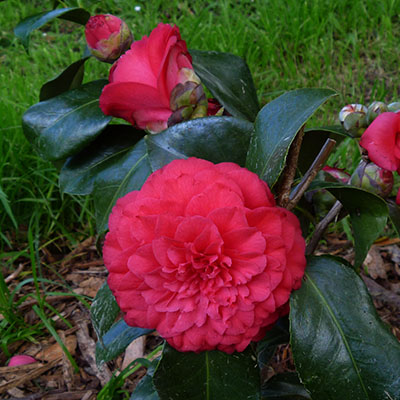 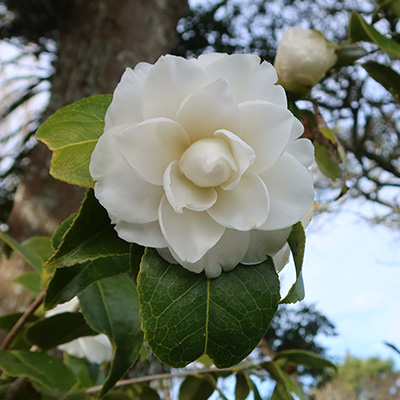 Photo of flowering camellia to come

Japonica. The International Camellia Register informs that this camellia is described in early catalogues as "Delicate white with a few rose stripes, imbricated" (1855-1856) and "Perfectly imbricated, all the petals transparent, waxy white; sometimes rose flowers" (1881).

On 2 October 2022, Ann Foster, wife of immediate past Mayor Andy Foster, planted this camellia at the historic Halfway House in honour of her ancestors, Edwin and Mary Bannister. The Bannister family lived across the stream, within view of the historic Halfway House, from c1870 to 1900 on land they owned from 1855. The ceremonial planting was during Heritage Week and was on the occassion of the visit of His Excellency Dr Richard Davies, husband of the Governor General, who planted a rimu tree for the Queens Jubilee.

Photo of Deutzia to come

A deciduous shrub with arching branches covered in scented white flowers originating from the woodlands. Deutzia scabra is native to Japan. Deutzia would appear to be an early New Zealand colonial favourite, as it is often advertised for sale in the early newspapers.

Our plant was grown from a cutting, sourced from a deutzia growing through the street fence frontage in an old garden at 99 Waiwhetu, Lower Hutt. The source deutzia no longer exists.

An old deutzia shrub was growing in the garden at the historic Nott House aka Ivy Bank Farm in Glenside, in 2011. 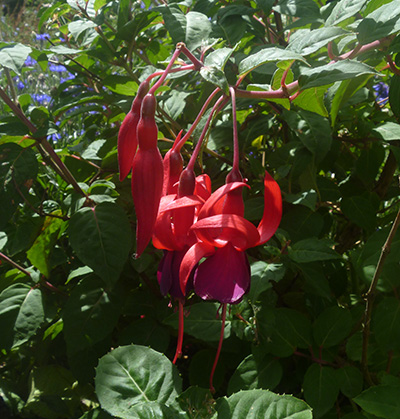 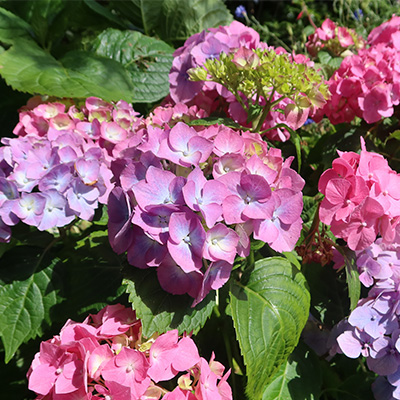 A full headed blue flower. This Hydrangea was struck from cuttings taken from outside the abandoned school in the Maungapurua Valley (Bridge To Nowhere), Whanganui River, in the year 2000 by Clint Libby, Karori, while tramping through the area. Maungapurua Valley was a World War I Soldier settlement from 1917-1942.

Maida Baddiley lived to the grand age of 106 years. Her hydrangea was originally grown in her garden at 14 Newtown Avenue, Newtown, Wellington. She took it from there to her garden in Paparangi in 1973. It has a rich dark blue flower fading to plum. 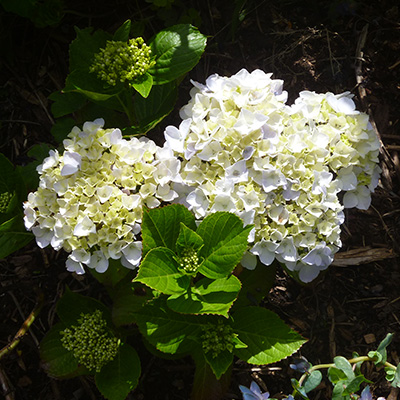 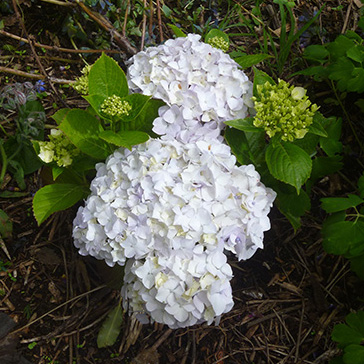 Very old variety from Japan. Coastal, wind and sun tolerant. Large growing. White, may tinge to light pink or blue depending on soil. The smaller flower heads are useful for drying for flower arrangements. 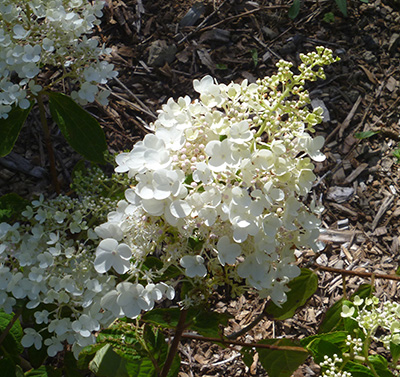 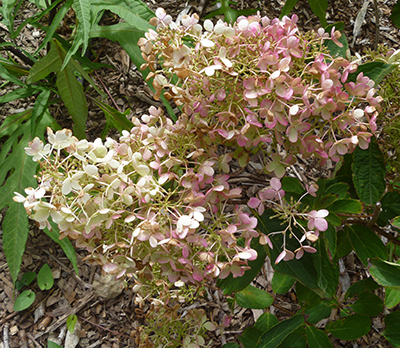 A distinctive form of Hydrangea with dark green, oval, pointed foliage that turns bronze in autumn. The main event is in spring when there is a spectacular display from the long panicles of frothy cream blossom. The flowers gradually fade to pink as they age. Delicious and deciduous. Colour cream and pink. Upright habit. 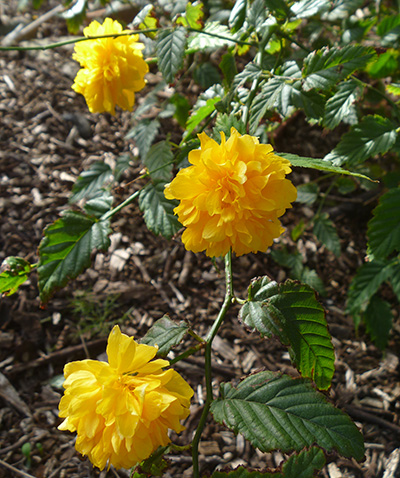 Double Flowered Japanese Kerria. The Yellow Rose of Texas. Has pom poms of yellow on bare branches in spring and with climate change, we have had a second flowering in mid summer. Came to Kew Gardens in England in 1836. 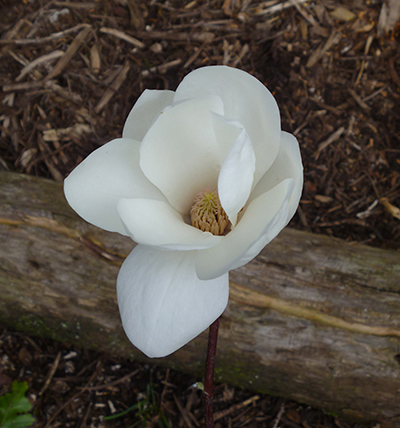 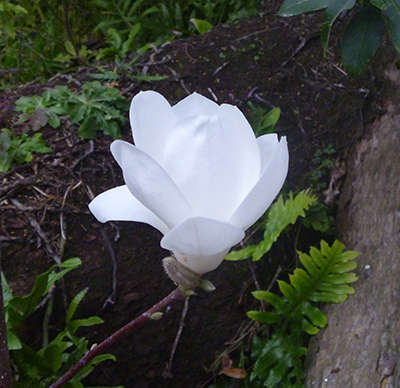 One of the earliest magnolias to flower. White fragrant flowers. Dark green leaves. Specimen tree for lawns and borders, parks and gardens. Growing conditions, full sun to part shade. Tree is frost hardy. Will tolerate all soils from sand to clay as long as it is well drained.

Magnolia gracilis Salisb. is a synonym of Magnolia liliiflora Desr. Native to China and introduced to Europe in 1790 this Magnolia has a multi-branched, shrub-like habit. The blooms open from long erect buds and appear for several months over spring. Rich purple on the outside with white interiors. Likes a sunny, sheltered spot with acid soil. Deciduous. 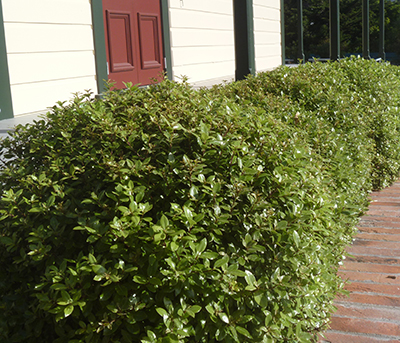 Good low growing hedge. Naturally bushy and rounded, it is further enhanced with a light trim. This is an alternative to buxus sempervirens (box) which was commonly used in early New Zealand and since 1998 has been affected by blight in this country. 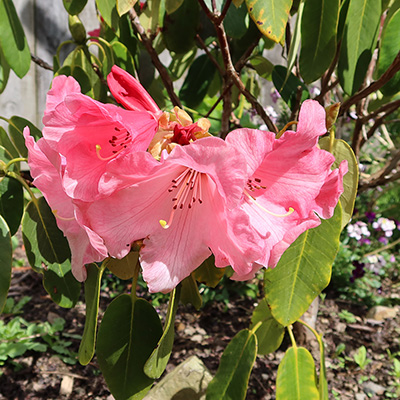 William Martin (1823-1905) of Green Island, Dunedin, bred New Zealand's first registered hybrid rhododendron, Marquis of Lothian, in about 1880. It is considered attractive for its mid-pink flowers and its smooth beige bark. 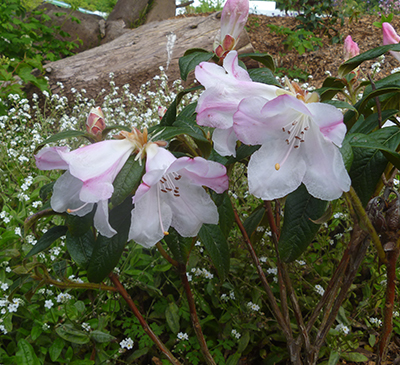 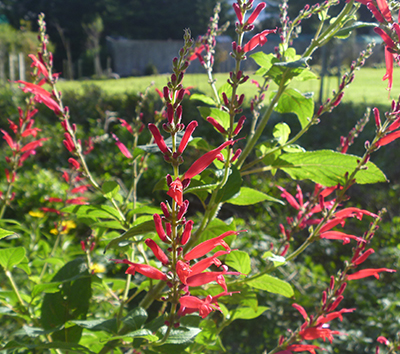 Syringa White
This lilac came from the garden of Mary Glover Bibby (1867-1936) at Rose Street, Waipawa. 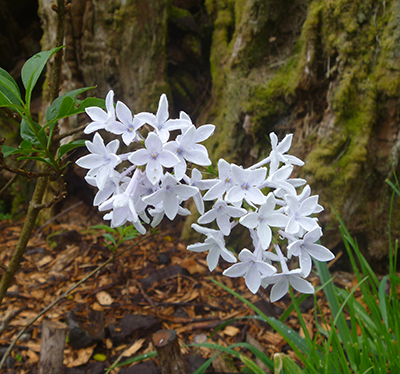 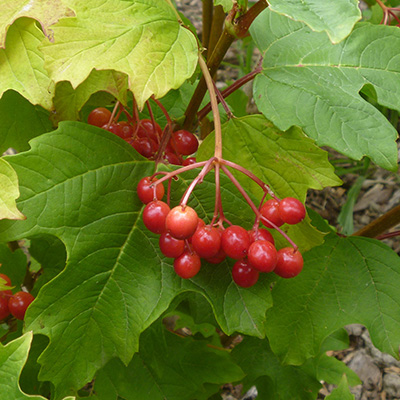 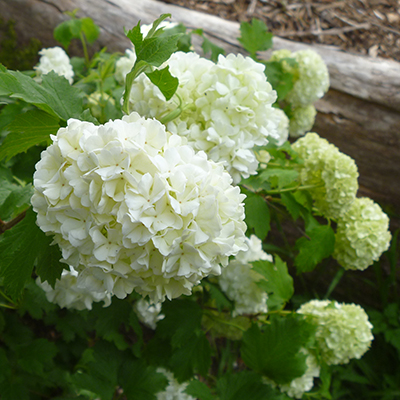 The main feature of this deciduous shrub is the large globular, white, 'snowball' flower-heads that appear in spring. Forms an open, graceful shrub with green leaves that have good autumn colour. Easy to grow and a firm favourite for good reason. Grows in most soil types. Needs well drained soil. Tolerates wet soils. Frost hardy. Grows in sun or semi-shade.

It is a real joy to children who love the ball like flowers. We couldn't resist!

Mr J Joyce, landscape gardener, writes about it, in his Gardening Notes, in The New Zealand Tablet, 1915, describing "a very fine, tall-growing shrub with large white flowers like snowballs - hence the name."