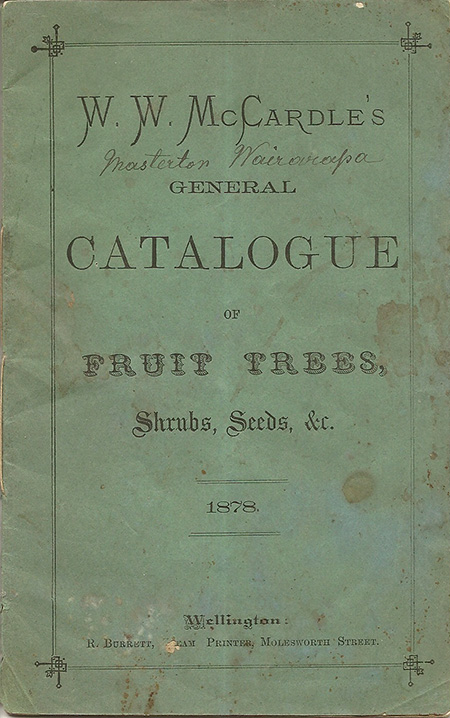 The 1878 McCardle catalogue has been used as a guide by the Heritage Gardeners for planting fruit trees, flowers and other shrubs. The catalogue informs us what plants would have been available to farming families and people living in the villages and towns of the Wellington Province in mid-Victorian period of New Zealand settlement.

William Wilson McCardle was born in Scotland and migrated to New Zealand from London in 1862, arriving in Lyttleton on the Chariot of Fame on January 29, 1863. His occupation on the ships passenger list is shepherd. He spent two years shepherding in Ashburton before returning to Christchurch. He acquired his gardening and orcharding skills when he was employed for two years by John Greenaway, a Christchurch nurseryman who focussed on the home garden and landscaping, rather than pastoralisation and shelter.

He married Janet Martin in 1866 and in about 1869, they moved to Dunedin where he founded his own nursery, Glen Gardens, Caversham.  From 1872-1874 he won prizes at Royal Horticutural Society of Otago exhibitions for his fruit and vegetables, and he was a member of the Royal Horticultural Society committee. In 1874, William McCardle wrote to the editor of the Otago Daily Times, stating that he had the largest collection of fruit-bearing trees in Otago.

Six years after arriving in Dunedin, he sold out - there is a record of the 1874 sub-division of his land on Glen Road in Dunedin, and in 1875, the sale of an orchard with 150 trees. He then established a nursery in Masterton, advertising fruit trees, forest trees, shrubs, plants and seeds for sale, from 19th June 1875.

He won the Stuart Cup for apples at the Wellington Horticultural Society competitions in 1882. The Cyclopedia of New Zealand (1897) says 'McCardle's apple orchard, stocked with its hundred fruit-bearing varieties, was soon the talk of the Wairarapa.' Nursery Road, in Masterton, is where the orchard was located.

The Masterton City Council website informs us that in 1877, Mr McCardle was one of the first Trustees elected to establish a public park in Masterton, which is now known as the Queen Elizabeth Park. In his book 'A Very Publick Reserve' Gareth Winter (2008) writes that Mr McCardle started laying out the grounds in the winter of 1878. The McCardle descendants advise that he laid out the planting plan for the grounds and his family helped plant the many beautiful ornamental trees that grace the park today.

Mr McCardle founded the township of Pahiatua and in 1884 he moved from Masterton to farm at nearby Mangahao. Gareth Winter writes that his nursery clearing out sale advertised over 5,000 apple trees, 1,500 plums and over 2,000 rhododendrons for sale.

The Cyclopedia of New Zealand (1897) states 'Though he discontinued the nursery business, he had at his pretty homestead on the banks of the Mangahao, a very fine orchard of 12 acres and a flower garden containing the best collection of rhododendrons in the Colony at that time.'

The McCardles named their Mangahao farm Riverview. The homestead, with its 'splendid library' was destroyed in the 1898 bushfires. In 1900, Mr McCardle sold his Lincoln stud, dairy herd, land and remaining rhododendrons and relocated to Te Awamutu, Kawhia. He was a Member of the Legislative Council from 1907 - 1914. He died in Walton in 1922 and is buried at the Mangatainoka Cemetery, north of Pahiatua.

Seeds of Annuals and Bienniels

This plant list of seeds has been copied from the W.W. McCardle 1878 catalogue. The common name used in New Zealand has been added beneath.

Myosotis Azorica
Azorean Forget me not