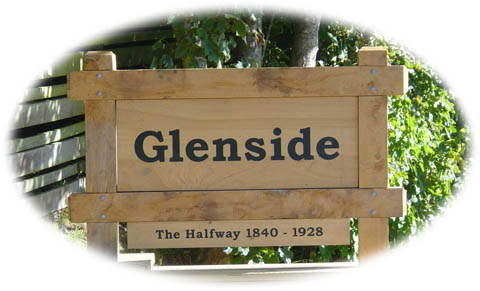 A rural place beside streams in the folds of hills.

The Glenside Heritage Gardeners are an Accredited Award Provider (AAP) with The Duke of Edinburgh’s International Award Aotearoa New Zealand | Hillary Award. Click the image above to learn more.

A short guide to Glenside

Glenside is a suburb located between Wellington and Porirua, centrally located at the southern end of New Zealand's North Island. It is mainly rural zoned and is between the neighbouring communities of Johnsonville and Tawa on the old Porirua Road. Hills, streams and rural landscape characterise the area. The resident population is 345 (NZ Statistics, 2013 Census).

Walk from Twiglands Gardeners World up historic Glenside Road and the old Stebbings Road to Stebbings dam. Glenside residents have been planting and maintaining the stream sides and natural environment along here every year since 2002. A beautiful walk.

At the entrance to Glenside Reserve, turn sharp left and take a short ten minute loop walk in Glenside Reserve. This is an easy grade walk designed for older people and little children. It is an excellent walk during a work break or for a short stroll. No bikes. Dogs on leads.

Walk up the driveway next to Twiglands to the historic Halfway House. The heritage garden is maintained by volunteers. There are park benches to sit on. The house is privately tenanted.

Glenside Village is built around the streams. The main streams of Belmont Gully, Paparangi, Churton Park and Stebbings Valley converge here. The village area consists of:

Monterey Apartments – there are 91.
A small settlement of about 36 houses.
An economic hub.

Glenside Village is the economic hub of the suburb. Twigland Gardeners World is complemented by the popular Café Thyme. All these business’ are adjacent to the Glenside Reserve and historic Halfway House.

The rural sector has eighteen rural landowners with 21 rural titles.

The largest reserve, of about 12 hectares, was purchased by the Wellington City Council in 1951 with money paid in compensation by Victoria University, then Victoria College, for encroaching on the Wellington Town Belt. It is currently leased to the Glenside Riding Club Inc. and is located behind Twigland Gardener's World. The historic Halfway House is located here.

The regenerating bush on the corner of Middleton Road and Westchester Drive began life as a reserve contribution when the Glenside village was sub-divided and developed in c1926. The reserve has been enlarged over subsequent years, and modified with roading encroachment.

European settlement dates back to 1840 when the area was called Halfway House and later The Halfway. It is located halfway between Wellington and Porirua.

It was renamed Glenside in 1928 when a Post & Telegraph Office was opened in the community. At the time it was thought the postal service would confuse the name The Halfway with Halfway Bush near Dunedin.

Ngati Toa are the mana whenua.