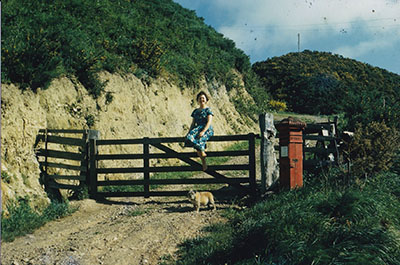 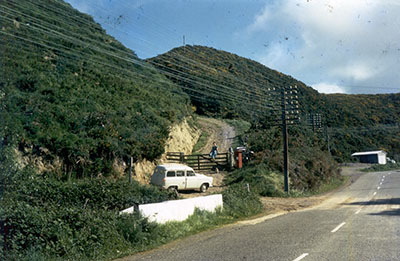 Wilma Wishart, 1962, at the entrance to the long drive up to the farm cottage. 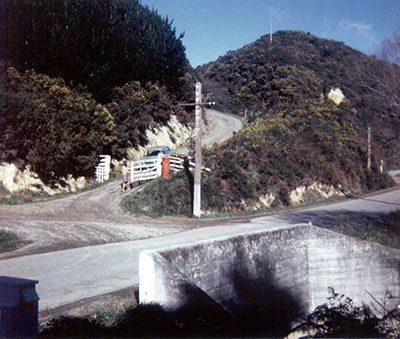 Ann Purchas, 1968, opening the gate to the drive, pillar box at the farm gate. 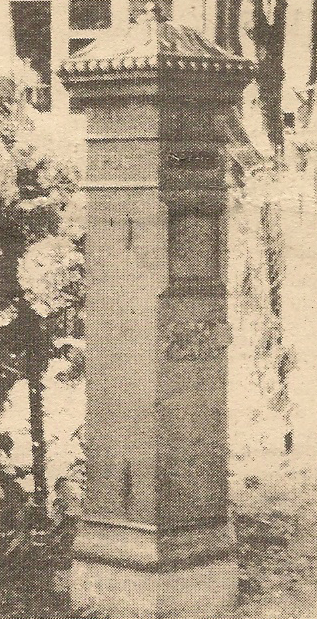 One of the two pillar boxes at Glenside, this one photographed for a newspaper article in the garden of Cecil Mason's cottage at Glenside. Photographer unknown.

The Glenside pillar boxes were brought to Glenside by Cecil Mason, who lived here in the 1960’s. One was located at his cottage. The other was at the entrance to the long drive up to the cottage, off Rowells Road. The entrance to the drive can still be seen and was used to get access to the cottage until 1996 when the road from the motorway, Westchester Drive was constructed through the middle of the farm. Today, 1 Westchester Drive is the location of the cottage.

At some time the pillar boxes were taken to Nelson, where Mr Mason retired to. After his in 1977, they came into the care of his nephew Doug McKee. Mr McKee passed them onto his children and his daughter donated hers to the Nelson City Civic Trust. In 2002 the Trust installed it on the corner of Nile Street and South Street near the Rutherford Hotel and is used to this day.

The article below is a from an undated, un-named newspaper clipping. Diana Flatman nee Broderick found the clipping in her collection in 2011 and passed the clipping onto Claire Bibby who purchased the cottage in 1998.

The pillar boxes at the Glenside Farm which have become a landmark in the area in recent years are soon to go.

Their owner, Mr C.G.W. Mason, is leaving the district and will take them with him. The following article has been contributed by Mr Mason.

The history of the Glenside Pillar Box

The pillar box at the farm gate on the old Porirua road, Glenside, has a history worthy of recall. The cast iron pillar box has been a bright feature of the drab city streets since around 1880. In the early 1960s pressure on footpaths and roads and the altered pattern of letter posting and box clearance resulted in the disappearance of the pillar box from Wellington streets.

According to an article “From pillar to post” by Fiona McCarthy, Manchester Guardian Weekly, February 10th, 1966, Anthony Trollope, the novelist, was responsible for an early step in pillar box introduction into the U.K. In 1851 Trollope was a surveyor’s clerk. He is credited with the recommendation that pillar boxes be cast iron with posting slots 5’ from the ground.

The first square boxes were set up in London in1885. No one seemed to like them. When only six had been erected the Department of Science and Art was assigned the job of designing a pillar box and came up with an ornamental hexagon; a pillar with a dome and rococo foliage design. These were known as the Scientific box. Each region in U.K. wanted its own design and many ornamental types became established until the Post Office decided to control the local pride.

Penfold, an architect, designed a box which became the national standard in 1866. This is the model exemplified in Glenside. It is cast iron, the ‘plastic’ of that age. The range were cast by P & D. Duncan Foundry, Christchurch, and this one has VR in art script moulded on the door and the lion and unicorn coat of arms cast into it above the letter posting slot. Many layers of paint over the years almost obliterate he details. The box has an underground footing about 3” long and calculated weight is well over ¼ ton.

Inside is a heavy gauze wire mesh which stops letters falling to the pavement when the door is opened. Even so postal box clearing must have required juggler’s hands to control the delivery on a wet windy Wellington night.

It is sad to find that after a life of 80-90 years free from damage, the Glenside box should have been used by a modern Hercules to register his strength. It was a heavy rock swung to satisfy the destructive urge of a proud vandal which smashed the door.