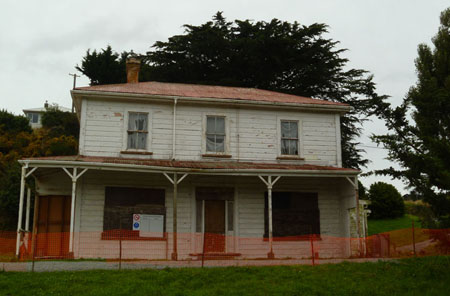 Project Manager Vikki Muxlow of Wellington City Council said that where possible,  the intention is to restore it to the original  heritage fabric.

"We have removed the additions that were put on in the fifties. Once it has been re-piled, we will start from the roof top and work down," she said.

The existing chimney is able to be strengthened and retained. A chimney that was removed in the past will be replaced with a mock look-alike to represent the original design.

The Council will take paint scrapings to identify the original exterior paint colour.

The house was built on the same site where a Halfway House was mapped in 1849.

The original name of Glenside was The Halfway, as it was located halfway between Wellington and Porirua.

The Halfway House was the name given to the house where travellers stopped for rest and refreshments on their journey between the two settlements.

Please slow down when meeting horses on the road. Give the horse plenty of room. One car at a time when overtaking. Do not overtake horses on bridges – instead, slow down or stop. Thank you.