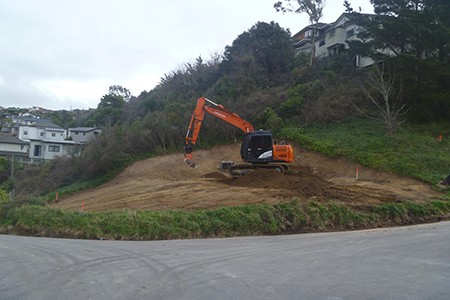 Archaeologist Kevin Jones has released his report about an early settler house site in Glenside, that was destroyed for earthworks for housing recently. He estimates the archaeology of the building he examined on the site dates from 1860.

"Overall, it seems likely that the house was built in the 1860s or more probably the 70s (an era
of peak immigration to NZ) and was abandoned and burned down by the first years of the
20th Century," he writes.

This site was part of a larger area that was set aside by the Wellington City Council as proposed reserve many years ago. However the reserve was never officially designated and since 2003 residents have been seeking to protect the site from development with Heritage NZ (the former Historic Places Trust), Wellington City Council and the developer's, the Callender's (Stebbings Farmlands Ltd).

An exploratory archaeological investigation was undertaken in 2005 and the subsequent report, written in 2006, confirmed the presence of an early house. The site was covered over with options of preserving it in a small reserve, or recovering information through archaeology.

The resource consent for earthworks was approved by Council in June 2018 and on Thursday and Friday, 2nd and 3rd of August 2018, the digger and archaeologist were on site.

Some artifacts were recovered and are with the developer. The community would like these to be retained and displayed in the nearby historic Halfway House.