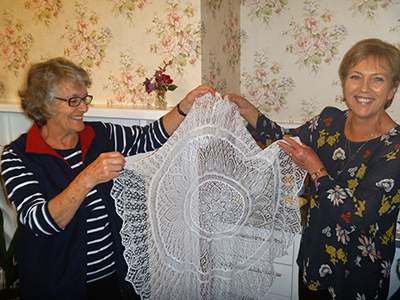 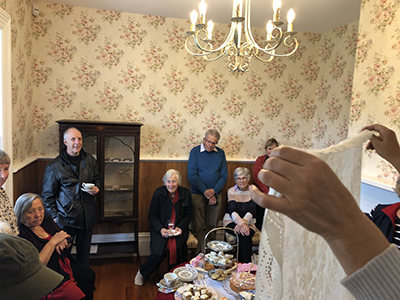 The new curtain lace for the Halfway House - loom woven in the UK to a century old Scottish pattern. Photo: Greg O'Connor, MP. 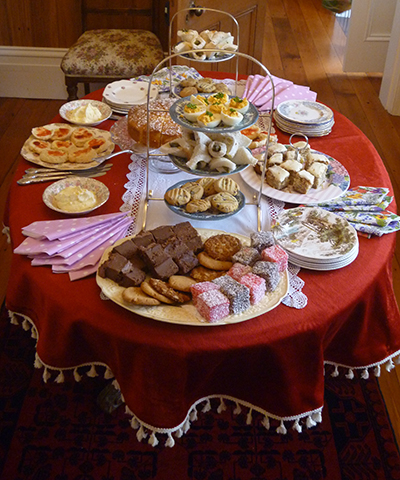 How Devonshire Tea is done in Glenside!

Fine lace, an 1880 colonial nurseryman’s catalogue and century old photograph album were some of the historical items displayed and discussed during Devonshire Tea at the historic Halfway House in Glenside.

Organiser Claire Bibby said the morning tea was hosted by the Heritage Gardeners and Glenside Progressive Assn. to thank people who had gifted heritage furnishings for the public rooms of the house.

“These generous gifts ranged from a colonial chair found in a woolshed and restored, to an oil painting of the Halfway House by Kapiti artist Hugh Evans,” said Claire.

“What brought them to life, were the backstories that each gifter shared. For example, Gabrielle MCCardle donated an aspidistra plant that originated from one that came out to New Zealand on a colonial sailing ship from England, then showed us the photograph album of the family who had looked after the plant for all those years.”

Local MP Greg O’Connor, who attended, said that New Zealanders travel the world marvelling at others histories and it was important to recognise the work being done by groups like those in Glenside, to preserve and highlight New Zealand heritage.