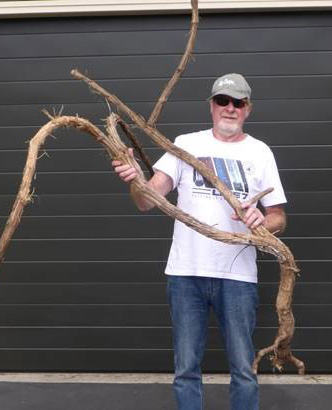 Old Man's Beard must go! Barry Blackett says this Old Man's Beard vine is the biggest he's found so far. This one was below the rural stretch of Middleton Road opposite Nott House (Ivy Bank Farm). 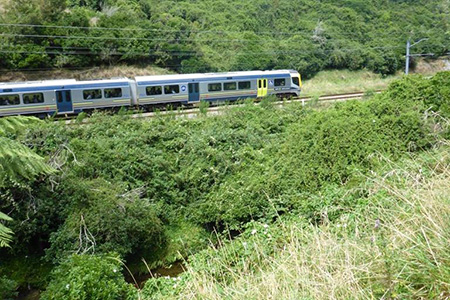 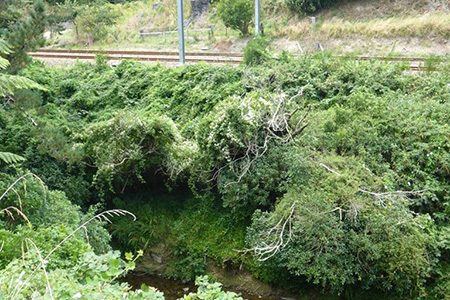 Old Man’s Beard is flowering and Glenside resident Barry Blackett is offering to help landowners in the suburb to get rid of it.

“It’s been flowering for over a month now and is now starting to fruit so this is a good time of year to look for it on your property or anywhere nearby,” he said. “It has quite pretty, spiky white flowers which change to cotton boll looking fruit. Don’t be mistaken, it is not benign. It will smother our native bush if allowed to let out of control. The vine is soft, light brown and ribbed. It’s a bit like thick rope.”

Barry said about 14 vines, or groups of vines in Glenside have been traced and treated with picloram gel so far this year. Some sites are in inaccessible areas, such as the rail corridor, and will have to be treated with spray.

Barry has the gel and is happy to help landowners dose the root system or arrange for an alternative treatment. He said that follow up treatments are sometimes required.

“I saw a plant today just outside my neighbour’s place where I thought I had already removed the vine! Clearly, there is at least one more vine lurking down the same bank which I missed before! Furthermore, it’s now fruiting which means it can begin to spread!”

The Department of Conservation has named the Old Man’s Beard invader as one of its ‘Dirty Dozen’, 12 weeds which are causing particular problems in different parts of the country, but which can be removed by locals who have the right tools.