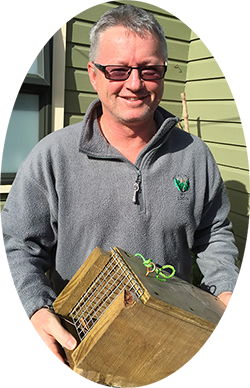 Look out rats! Glenside residents are after you!

Following on from the successful Halo project which trapped over 200 possums and 200 rats in Glenside, the locals are about to embark on an ambitious rat trapping scheme along the streams.

The rat trapping team is looking for ideas from the community for a catchy ratty name for the project. Operation Rat Attack? Operation Wounded Whiskers?

The idea of a project focusing on systematically trapping along the stream has been discussed for some time and came together at a meeting at local resident Barry Blackett’s home where Nick Tansley, the Halo convener and Kelvin Hastie from Croften Downs attended.

Barry has since called together a group of keen volunteers to see how the project might be progressed. Steve Rush, who was present, offered to be the project coordinator.

Steve says that streams are a well-known conduit for rats.

“By laying traps every 50 -100 metres along the 2.8km length of stream flowing through Glenside, we hope to significantly reduce the rat population,” he said. “This will lead to a greater variety of increased birdlife, less pestilence, and cleaner waterways.”

The community intend to trap from Glenside Reserve behind Twigland garden centre, along the Middleton Road stream corridor to Willowbank Road.

Steve will be visiting the local residents living beside the streams who are already trapping rats, to check their traps are working properly, and provide some trap maintenance and trapping tips.

Steve and his team are also hoping to bring more families into the trapping programme.

The first phase of the project will operate for six months, from 1 September 2016 to end of February 2017.

Steve says "If you have a catchy name for the project, please submit it to our Glenside Facebook page."