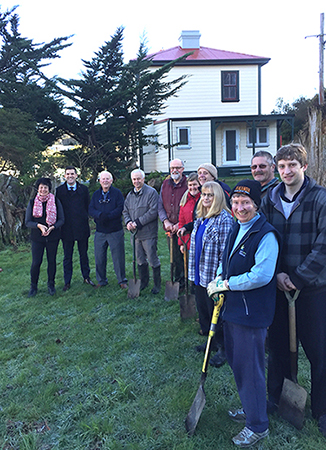 A medlar and a Tom Putt apple were among the rare varieties of fruit tree that were planted in the heritage farm orchard at the Halfway House in Glenside on Saturday, 16 July.

Claire Bibby, who leads a group of heritage gardeners, said that planting an orchard of old variety fruit trees had captured the imagination of the community.

“Sixteen fruit trees were donated by people who have a connection to Glenside and we are still getting gift offers. Our youngest planter was Harriet Lester, who is 3, and our oldest was a Glenside resident who is 87.

Claire said the types of trees planted were found in early settler orchards locally. They were either listed as growing in the Stebbings farm orchard, who came to the area in 1863, or were listed in an 1878 fruit tree catalogue of W W McCardle, who supplied the Wellington market.

The medlar dates back 3000 years. Claire said she was introduced to it by the late Max Dorset, who had one growing at Ivy Bank Farm, the former Nott house in Glenside.

“He picked the fruit and let it blet, or rot, in a bed of dry straw in his attic. It’s a winter fruit paste, best eaten with cheese.”

She said the Tom Putt apple dates back to 1780 and was a favourite of the Stebbings children, who describe it as ‘a perfect apple’ glowing red with pink flesh and ‘with flavour out of this world’.

The heritage gardeners are creating a farm garden for the historic Halfway House in Glenside. The garden uses heritage plants and flowers that would have been in the country pre 1900.