A Flower in Remembrance 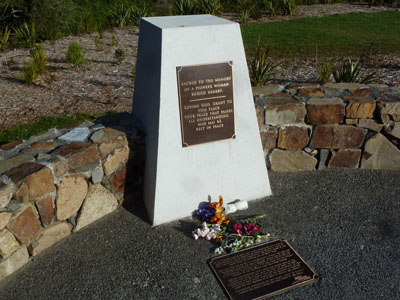 On Friday, 10 October 2014 and over the following weekend, people  placed flowers at the Glenside memorial to commemorate the life of the pioneer woman who died and was buried nearby.

172 years ago on 10 October 1842, at four o'clock in the afternoon, Bishop Selwyn and an entourage of 28 Maori passed by, travelling north from Wellington.

A neighbouring settler and the deceased woman's husband took the Bishop to the burial site where he blessed it. October 10 also commemorates the first anniversary of the unveiling of the memorial to her.

The memorial is located on Westchester Drive, Glenside. There is provision for parking.

The memorial was erected by Wellington City Council at the request of the Glenside Progressive Assn. Inc. and as an outcome of an Environmental Court hearing.

"One of our objections to the Westchester Drive extension was that the earthworks would disturb her burial site," said Claire Bibby, who was President of the local residents association at the time of the hearing. "The Council undertook archaeological investigations to ensure it was not disturbed.

The burial site, which was on privately owned farmland, was cared for by the small rural community for nearly 100 years. At one time it was surrounded by a small white picket fence and a cross. A new farming family came onto the land in the 1960's and due to the nature of their farming operation, people were not encouraged to visit the gravesite and its precise location was not remembered.

The memorial is placed as close as possible to the place where the community remember where she was buried.