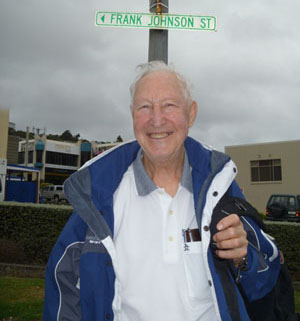 Howard Johnson of Canada, was recently in town to visit the places familiar to his great great great grandparents Frank and Anne Johnson of Johnsonville.  Howard Johnson came by cruise ship to Kaiwharawhara on 3 April 2013, evoking memories of Frank Johnson's arrival  to New Zealand by way of the ship Adelaide, on 7 March 1840.

Frank Johnson's original 100 acre block was Section 24 in Glenside, known then as The Halfway. He subdivided it into eight smaller blocks. Section 24 is where the new link road between Glenside and Churton Park has been built. However Frank Johnson is more often remembered for operating a timber mill on Section 11, a 100 acre section which was to become the town of Johnsonville.

Here they were shown the 150th anniversary plaque on the bridge over the Waitohi stream, commemorating Frank Johnson's arrival in New Zealand.

They walked beside the Waitohi stream, where Frank Johnson once operated a timber mill. This timber mill was located somewhere between the roads known today as Trafalger Street and Moorefield Road. i.e. near Remax Leaders and the Johnsonville Medical Centre.

Photographs were taken at the Frank Johnson street sign - the road where the Johnsonville Fire station is. 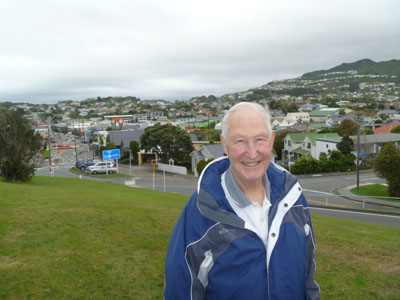 It is unclear what date Frank Johnson departed from New Zealand with his wife. In 1851 he is recorded with his wife and three sons on the Welsh Census. He migrated to Lennoxville in Canada where he farmed 100 acres. Many Johnson descendants are buried in the St George Anglican Church at Lennoxville.

After their day at Johnsonville, Howard and Laurie went to Te Papa Museum to learn more about the colonial experience of travelling to New Zealand by sailing ship.

Howard and Laurie were only in Johnsonville for the day. Their cruise ship departed for the South Island that evening.