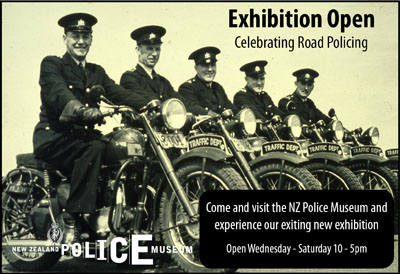 Glenside community is on display in the NZ Police Museum road policing exhibition, as a showcase example of the way forward for road safety.

The community features as the year 2010 in a time-line of road safety activity.

An extract from the display about Glenside.

“Communities can play a vital part in keeping New Zealand’s road system safe. Glenside is a shining example of one such community. The Glenside Progressive Association’s mission is “safety for all road users”. Working in partnership with the Wellington City Council, New Zealand Transport Association, New Zealand Police and local members of Parliament, the Glenside community has achieved a remarkable amount.

“The Glenside Progressive Association recognized that they needed to tackle a number of factors contributing to the high crash rate on Middleton Road. They quickly got to work holding meetings with Police. Highway Patrol starting policing the road and agreed that speed was a big issue. Wellington City Council provided $300,000 and work began. Bus stops were removed. Parking was enhanced, new footpaths were created and road shoulders were sealed. Vegetation was removed, traffic gateways were installed and speed limits dropped.”

"As Glenside suggests, communities play crucial roles in road safety. They can work in partnership with Police to keep roads safer for all road users."