Here we are looking at the milk-stand, memorial tree and revegetation project on historic Glenside Road corner.

A gravesite, former whisky still site, milk-stand and other archaeological areas featured in a historic walk at Glenside on Sunday 22 March.

The walk, organised by Daphne Pilaar of Wellington City Council, attracted people from as far north as Waikanae and south as Newtown.

About 30 people were shown sites and places of interest in the “Glenside Then and Now” walk, concluding with a tour of the historic Halfway House on Glenside Reserve and afternoon tea at Herbs Café.

The walk was one of a series in the City Council Stepping Out programme aimed at encouraging people to get outdoors and enjoy themselves in the fresh air and learn a little about the places and people around them.

From here we walked up Glenside Road looking at the milk-stand, Murray Henderson's memorial tree, hawthorn's planted by the first settlers, the Barrow family, and a where a gravesite is believed to be, dating from c1841.

Up Stebbings Road. The Stebbings family first settled at the end of this road in 1863.

On Stebbings Road we looked at an archaeological house site, where a whisky still was, the Stebbings farm gate, and the favourite swimming hole of Johnsonville youth, Moxies Pond.

At Stebbings Dam we stopped to look at the Glenside Streamcare revegetation project.

On top of the flood retention dam sights discussion centred around floods, future Churton Park housing development and a future walkway up to Marshall Ridgeline. 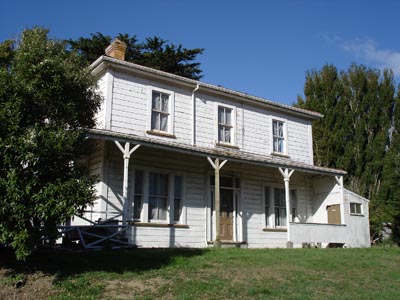 Our walk finished with a tour through the historic Halfway House and afternoon tea at nearby Herbs Cafe.