Our approach to rose selection is to use only roses that would have been growing in New Zealand before 1900. However, we also made it a priority to plant the roses saved from early-settler gardens in Glenside, even if these roses date after 1900.

We selected heritage roses that have been written about positively by New Zealand rose experts for their beauty and for their resilience against disease, insects and wind.

The most vigorous climbing roses are planted along the poplar-tree row. One day the poplars may be felled at hedge height however by then we hope the roses will have billowed up into a hedgerow, providing an alternative shelter for the orchard.

The photographs of roses have all been taken in the Halfway House garden.

The rose was named by Albert Barbier, famous French gardener and rosarian, after his father. 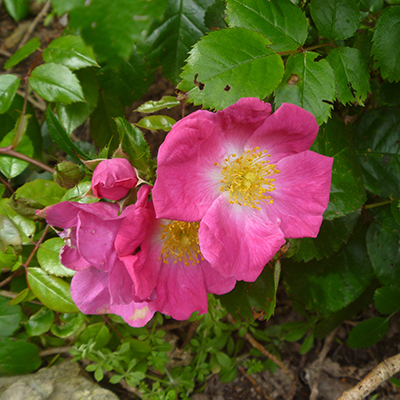 American Pillar. 1902. Climber.
A Glenside rose. This rose was grown from a cutting taken from the original American Pillar rose growing at the Halfway House at the edge of the western verandah. The original rose died after Wellington City Council sprayed the pest plant passion vine growing next to it.

The rose was bred by an American horticulturalist, Dr Walter Van Fleet.

The Banksia rose. Rosa banksiae. Lady Banks' rose
The Banksia rose is named for Lady Dorothea Banks, who was married to Sir Joseph Banks -  the botanical artist who travelled to New Zealand with Captain Cook. It was planted in Empress Josephine’s garden at Château de Malmaison 1804-1814. The white double form is most popular in Europe whereas the double yellow is popular in New Zealand.  The Charm of Old Roses (Steen, 1987:145-148).

Suppliers: Trinity Farm, Otaki. After being accidentally mown, it was replaced with one from Twigland Gardeners World, Glenside.
Gifter: Celia Wade-Brown Mayoral Fund.
Planted: 2017. Under an old plum tree. It is not very happy here and will be relocated.

Gifted cutting from the museum curators at Golder Cottage (built 1876), Upper Hutt.
Planted: 2017. Along the poplar row. The rose did not survive here due to dry soil and branches falling on it. It will be replaced and planted at a more suitable site. 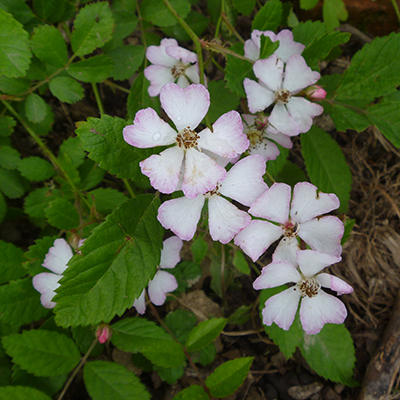 The Bulliman rose [Unidentified]
What is this rose? It came from the former farm garden of the Bulliman family, who lived north of Waikanae. They built their farm cottage during World War I. The rose has a cascading habit. It flowers once, with highly scented racemes of clustered dainty pink and white flowers, each flower about one inch diameter. The cottage was removed for the Pekapeka expressway and the garden destroyed, though some orchard remnants remain.

Gifter: Claire Bibby.
Planted: 2018. Along the poplar row. The rose did not survive here due to dry soil and branches falling on it. It will be replaced and planted at a more suitable site. 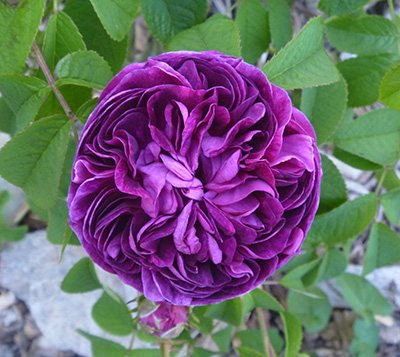 Gifters:
3 x Celia Wade-Brown Mayoral Fund. Planted: 2017. Rose arbour. One of these died in 2019 as a result of a big wind tearing the rambler from the main stem.

Dorothy Perkins. 1901. Wichuraiana rambler.
A Glenside rose. This rose, with its clear pink double blooms, has been found growing wild in three places at Glenside. These are on a hillside at the site of Drake’s garden (established c1840); on the bank above the milk-stand on the corner of Glenside and Middleton Road; and growing down a railway bank just north of the house at Ivy Bank Farm (established c1860).

In the early 2000s cuttings of the rose were taken from Drake’s and the milk-stand. It is still growing at Drake’s abandoned garden on the corner of Wingfield Drive and Middleton Road however it does not seem to have survived at the other two locations.

The Dorothy Perkins rose was bred by E. Alvin Miller in the United States. He was a plant propagator and foreman at Jackson & Perkins wholesale nursery company. Dorothy Perkins was the granddaughter of American rose-grower Charles H. Perkins. 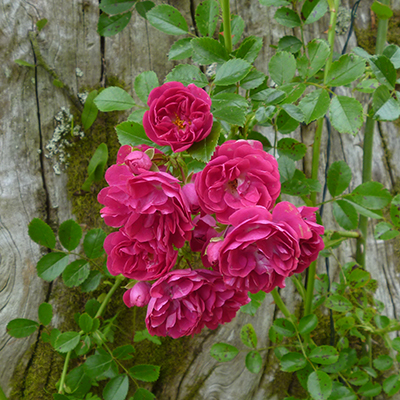 Excelsa. 1909. Wichuraiana rambler.
This rose was taken as a cutting from the mill town of Raurimu, where it was found growing up a tree. It is a rambler, with flowers one and a half to two inches wide. The colour is a clear, soft purply red. Gifter Viv Harris says it is "tough as nails" since Raurimu receives minus ten degree weather and is blazing hot in summer, and the soil is pumice from volcanic activity. The Harris family have a clubhouse (for the ski season) in the old sawmilling town of Raurimu, and Viv has saved and grown rose cuttings from early gardens in the old mill town. 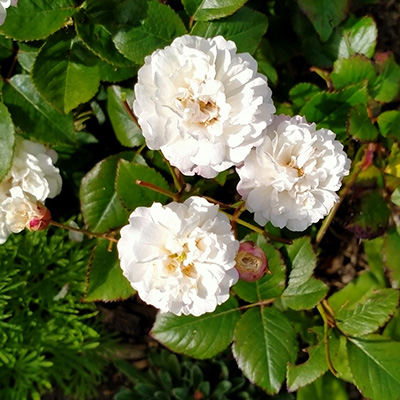 Félicité Perpétue. 1827. Rambler.
A vigorous rambler with cascades of clusters of rosette-shaped creamy-white flowers tinged with pink. Bred in 1827 by Antoine A. Jacques, the head gardener to Louis Phillipe, Duc d’ Orleans.

The rose is named for Vibia Perpetua, a noble lady and her slave Felicitas, who were canonised as Saints. In about AD203, Perpetua, aged 22, was imprisoned with her infant son and her brother and their servants for their Christian faith. Among the servants was Felicitas, who was eight months pregnant. She gave birth to her baby girl in prison. The two women faced a wild heifer in the Roman amphitheatre near Tunis-Catharge before being taken out to be slain by the sword. 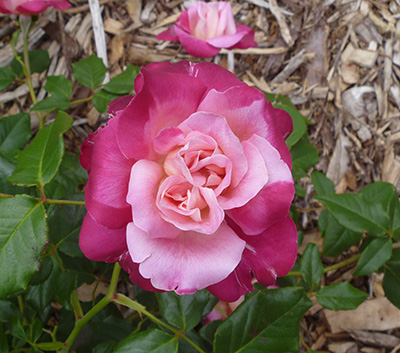 Named after the French general who defended Paris at the beginning of WWI in the Battle of the Marne. The Charm of Old Roses (Steen, 1987:95).

Hiawatha. 1931. Rambler.
A Glenside rose. Found growing at Ivy Bank Farm (established c1860) on the railway bank opposite the front verandah.  Clusters of bright carmine flowers about one to two inches in diameter.

The original form was bred in 1904 by Mr H. Walsh of Woods Hole, Massachusetts, United States. 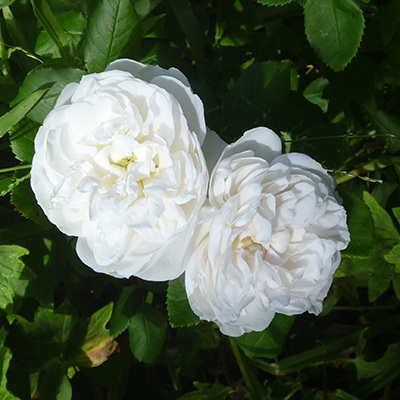 This rose was grown from cuttings taken from a plant at the burial site of a young child at Holy Trinity Church, Ohariu Valley.

Planted: 2017. Horse paddock fence line, and each side of the flower bank steps. 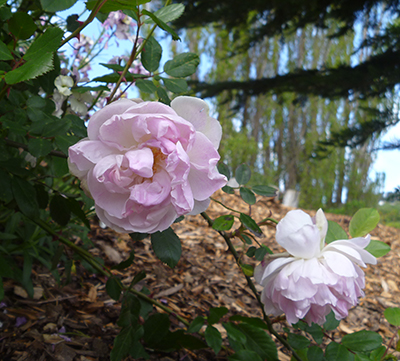 Maiden's Blush. 15th C. Bush.
A Glenside rose. White, blushing pale pink, double blooms. Found growing against the shed on the road reserve outside the early settler cottage at 219 Middleton Road, Glenside. It has since been lost from this location.

Healthy, early-flowering rose. Grows semi wild in the centre of the North Island and in Gisborne district. It grew in the cemetery at Waimate North. The Charm of Old Roses (Steen, 1987:153-154).

Fragrant. Grows upright to 2m then branches out, over-heavy with flowers. My World of Old Roses (Griffiths, 1983:61). 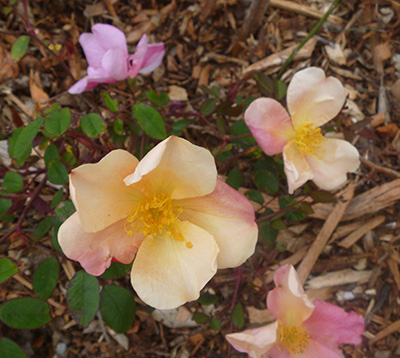 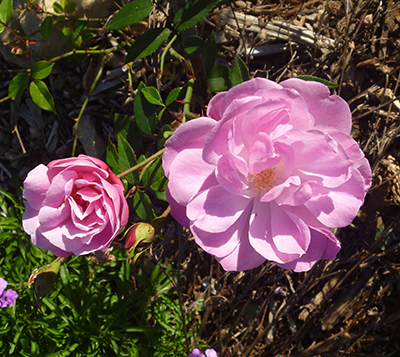 This rose is covered for the greater part of the year with dainty, rosy pink flowers in sprays. It came to New Zealand with the missionaries. The Charm of Old Roses (Steen, 1987:74-77).

The rose originally came to Europe via Sweden in 1752, and was first mentioned in the nursery paperwork of Englishman William Malcolm, as 'Evergreen Chine'. He later added a botanical name, Rosa indica [denoting related to China]. The first mention of it being called Parson's Pink China was in 1793 when it was grown in the garden of Mr Parson in Rickmansworth. It was introduced to horticulture in 1793 by Sir Joseph Banks, then Director of the Royal Botanic Kew Gardens.   Historic Roses Group Journal (Spring, 2002). Repeat Flowering Old Roses Part II by Peter Harkness. 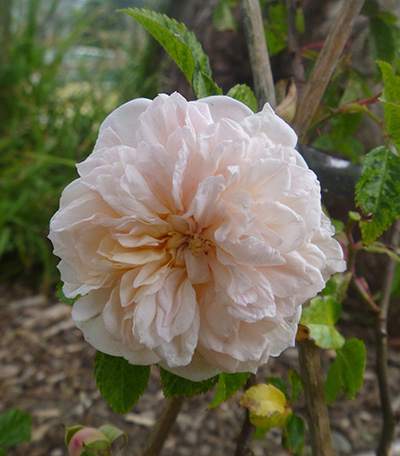 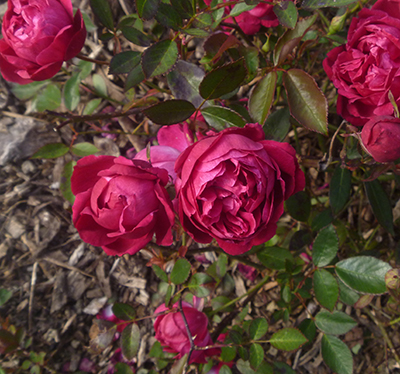 This was the first red rose introduced to Great Britain. It has been long held that the rose came to England via a captain in the East India Company, who presented it to a director in the company, Mr Gilbert Slater.

Gilbert Slater was a nurseryman from Knotts Green, Leyton, Essex, and a manager and owner of several ships in the East India Company. Ideas of Chinese Gardens: Western Accounts 1300-1860 (Rinaldi, 2016:244).

Slater's gardener, James Main (1835), disputes that it arrived in England by this route and says although the rose was received by Mr. Slater in 1790 and flowered for the first time, in his collection in 1791, the R. semperflorens was not then among his imported plants and was received through some other channel. The Story of the Modern Rose. The Garden Magazine  (Wilson, 2015:253-256).

New Zealand's rosarian Nancy Steen writes that it was "introduced to New Zealand in 1814 by Rev. Samuel Marsden at the first Mission Station at Rangihoua Pa." The Charm of Old Roses (Steen, 1994:63).

This origin is questioned by writer Keith Stewart, in Rosa Antipodes, The History of Roses in New Zealand.  He says that it is a "persistent legend" and that there is "no evidence that specimens of Slater's Crimson China, were brought here on the brig Active, when it transported the original missionary settlers to Rangihoua in 1814." (1994: 65-66).  He says that there is no description of it growing in the missionary gardens at the Rangihoua settlement in any of the detailed reports by visitors, or in Rev. Marsden's own careful records.

Keith Stewart surmises that the plant was brought to New Zealand in 1812 by Ruatara, a Ngāpuhi rangatira of Te Hihitu hapu, who travelled to London as early as 1809. Ruatara failed in his objective to meet King George II, and was sent back to New Zealand on the Ann, where he met up with Rev. Samuel Marsden, who took him to his mission at Parramatta in Sydney. Ruatara returned to New Zealand in 1812, with seed wheat and agricultural tools and set aside land for the future missionary settlement next to his own pā at Rangihoua. Stewart surmises that the crimson rose came to New Zealand with Ruatara in 1812, and that it was initially grown in a secret place, since red was highly prized as a symbol of mana (1994:65-68). 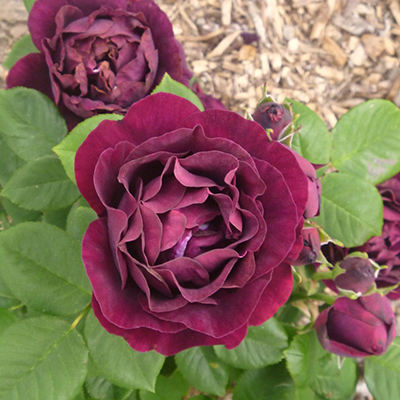 Gifter: 1 x Adrian Liner and family.
In memory of: Jean Liner.
Planted: 2020. Rose arbour, on the west side.