The Halfway House orchard was planted on Saturday, 16 July, 2016. Sixteen trees were planted and each was donated by someone in the local community. Additional orchard plantings have since been made. Some remnants of the original Halfway House orchard remain, such as elderberries, a yellow fleshed red skinned plum, and a red fleshed cherry plum.

Selection for the orchard plantings was based on the following factors:

Varieties named in early settler letters, or published journals written about The Halfway - Glenside since 1840.

Named varieties available or growing locally when the existing Halfway House was built, which was in the mid-Victorian period.

Whether the fruit trees could be pollinated by each-other or were self-pollinating.

Some post Victorian era fruit trees were selected for pollination purposes. These trees were chosen for the likelihood of being planted in a farm orchard or kitchen garden.

The Onslow Historian, Volume 22 (1994) in which Eva Samuda nee Stebbings, recounted memories of the Stebbings orchard on the family farm. The Stebbings family had farmed The Halfway - Glenside since 1863.

Coxs Orange Pippin. Bred in England in 1825.
Bred by horticulturalist Richard Cox of Buckinghamshire, United Kingdom. First made commercially available by E. Small & Son in 1840 and Charles Turner of the Royal Nurseries in Slough in 1850. By 1883 one of the most popular apples in England. Recorded in a 1878 catalogue of William Wilson McCardle, based at Masterton, New Zealand.

A medium sized apple with a sharp tangy flavour. The skin is striped red over green background. Best dessert apple of all. Ripening early to mid season.

Egremont Russett. First recorded in England in 1872.
First written about in 1872 but believed to be older. Name possible from Lord Egremont's estate at Petworth, in Sussex, when it is believed to have been grown.

Small to medium size. Clear golden russet skin. Flavour is sweet and rich with a vanilla taste. Flesh texture is compact and nutty. This is the best of the old English russet apples and one of the healthiest varieties for use in home gardens. Heavy cropping. 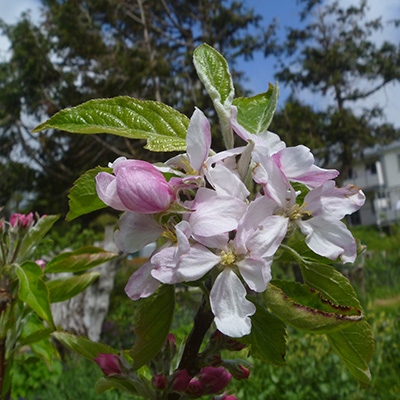 Fryberg. Developed in New Zealand 1934.
Originating as Kidds Orange Red in 1914 by James Hutton Kidd of Greytown, a cross between a Delicious and Cox's Orange Pippin. His executers passed experimental seedlings onto the Department of Scientific and Industrial Research (DSIR) who grew on the best seedlings and named the choicest, with Fryberg's permission, after Lord Freyberg, commander of the 2nd New Zealand Expeditionary Force in World War II, and Governor-General of New Zealand 1946 to 1952. Commercially availale in 1958. The DSIR (McKenzie & Mouat, 1959) recommended it as best for the home orchard.

A cross between Delicious and Cox's Orange Pippin. Freyberg has an aromatic, creamy, white flesh with a fine and juicy texture that makes it a pleasure to bite in to. The small, greenish-yellow russeted fruit has a mid season ripening time. These apples hang well and continue to develop flavour even when very ripe. 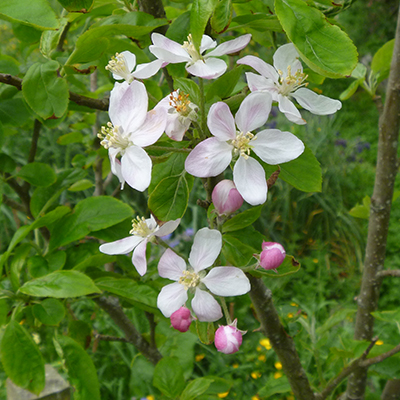 Golden Delicious. Discovered in United States 1890.
Discovered as a sapling 1890-91 in the Mullins orchard, West Virginia, United States. Made commercially available by Stark Brothers during World War I. 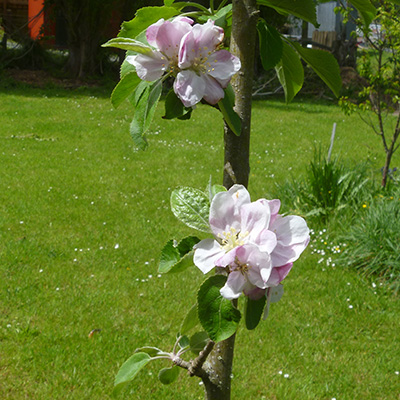 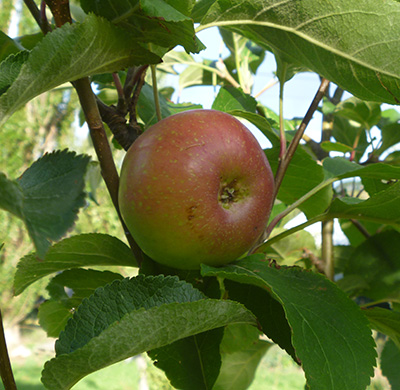 Irish Peach. Available commercially 1820.
It is said to have originated at Longford House in County Sligo, possibly as early as the late 1500s. It was originally named Crofton after the Crofton Family who lived at Longford House. The apple was first documented in 1812 in a Country Antrim survey. It was to sent the London Horticultural Society by the nurseryman John Robertson of Kilkenny in 1819. It was renamed Irish Peach for export and was a very popular variety with the Victorians and Edwardians in England.

This apple ripens early in summer. The skin is green with faint red stripes and the flesh is high quality with a very good flavour. This apple will not store well and is best eaten straight from the tree. This apple bears its fruit on the tips of the branches and it pays to be aware of this when pruning i.e. don't cut back all the strong leaders with fruiting tips. Early.

"In the lower orchard grew three large Irish Peach apple trees. By late December the apples were ripe and sweet and as soon as the hay was cut in the lower part of the orchard we would dash down and collect the windfalls and bird-pecks. This we did every morning until the trees were picked, the first arrival collecting most of the juicy 'loot'." Memories of Eva Samuda (b1907) nee Stebbings, Onslow Historian, 1994. 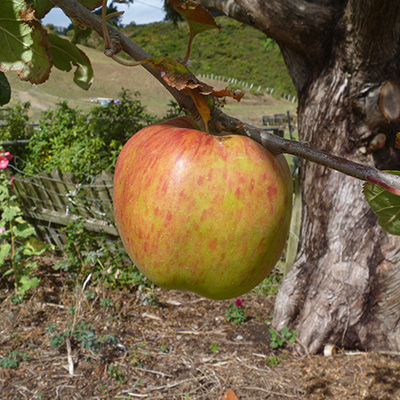 Northern Spy. Grown in United States in 1840s.
Northern Spy was developed in the early 1800's by Herman Chaplin in an East Bloomfield, New York orchard using seeds from Salisbury, Connecticut. Sprouts taken from the original tree and replanted by Roswell Humphrey would go on to produce the first Northern Spy apples. It was popular in local orchards in the 1840's, then in 1852 the American Pomological Society listed the Northern Spy as a new variety of promise and a variety worth cultivating. By 1900 it was the third most popular aple grown in United States. It was marketed in New Zealand in 1878 by William Wilson McCardle of Masterton, and grown locally in the Stebbings orchard.

This large and handsome heritage apple from America has yellow skin that is heavily splashed with red. High in Vitamin C. Excellent flavour with slightly yellow flesh that is crisp and juicy. Great for cooking as well as fresh eating. Stores well and once established requires very little attention. Late. 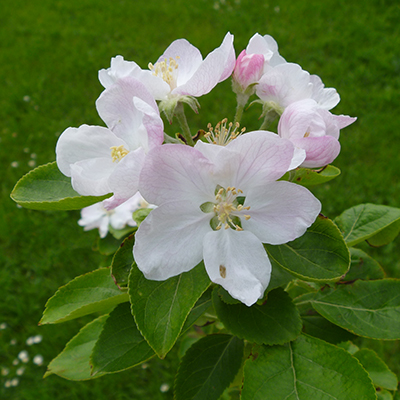 Peasegood Nonsuch. First planted England c1854-58.
The origins of the name of this apple are that Mrs Peasgood from Stamford, Lincolnshire planted five apple seeds from an un-named cooking apple, only one germinated and it produced such a wonderful apple it was named after Mrs Peasgood and the Nonsuch part of the name translates as "without equal". Received a First Class Certificate from Royal Horticultural Society in 1872.

Huge, flat, highly coloured fruit with red stripes. Highly esteemed for culinary purposes. The flesh is firm, juicy and tart with the right blend of acid and sweet. When stewed the flesh breaks down to a 'froth'. This apple is the perfect choice for baking - especially apple pies and apple sauce. Matures late summer to autumn. 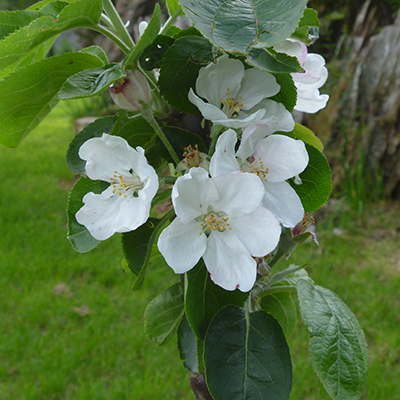 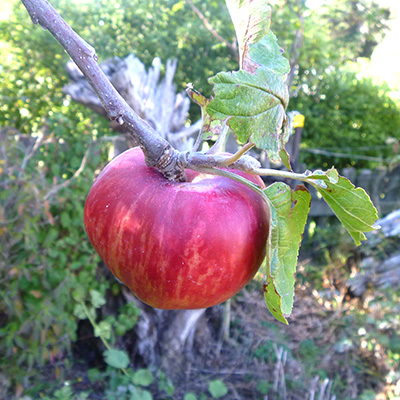 Tom Putt. Well known in Devon 1780.
Tom Putt apple trees - also sometimes called Jeffreys Seedling. Named Tom Putt after an 18th-century lawyer who lived in Gittisham near Honiton in Devon or his nephew of the same name who was the vicar of Trent near Sherborne, which was then in Somerset.

Large, rather flattened red, shiny apples with the odd green patch. Tom Putt apples are superb cookers, with a light flavour and melting-sweet texture. They are also an ideal choice for the sharp element in a blended cider. Finally, they are also easy to juice, making tangy rich flavoured juice. A Tom Putt tree is a real trooper; it is vigorous, begins cropping young and bears large, steady harvests year in, year out on branches that have a spreading habit. They are very resistant to scab.

"Tom Putt was to us the perfect apple. It was rather flat and where the flower head had fallen off five odd little weal marks converged like quaint tear drops. Its colouring was magnificent – a bright, flowing red – and its flavour out of this world The most intriguing part to me, however, was the pinkness of the flesh which penetrated the apple for a good quarter of an inch. One wonders why some of those apples lost their popularity." Memories of Eva Samuda (b1907) nee Stebbings, Onslow Historian, 1994.

Apricot Moorpark. Successfully cultivated for fruit in 1760 in England.
In 1542, during the time of Henry 8th, his gardener brought apricots to England from Italy. However, the Moorpark apricot was named from Admiral Lord Anson's estate Moor Park in Hertfordshire, England where he cultivated it in c1760 and was able to produce fruit from the trees. Origin, China.

Ripening in February each year the Moorpark apricot is a late variety and a real treat when eaten ripe from the tree. Can also be bottled or dried. Prefers a warm sunny position however is very cold tolerant. Self fertile. Prune only in summer on a warm dry day. 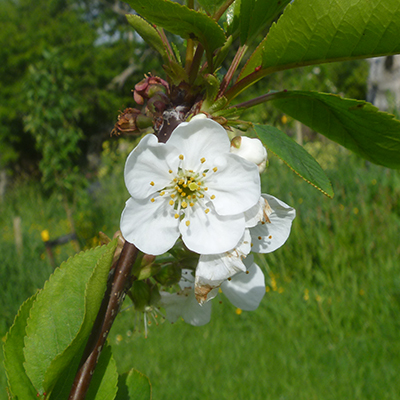 Montmorency. 16th Century.
Montmorency is a 16th century United Kingdom cherry originating from Europe. It is named for the Montmorency Valley in France, where it grew. It is recorded in an 1899 Yates New Zealand catalogue as being ‘new’ to New Zealand from the United States of America.

It is a self-pollinating sour cherry, popular in United States for cherry pie. As the New Zealand export market favours Asia and their preference for sweet cherries, it wasn’t popularised here. It is now gaining grower interest for its healthful anti-oxidant and anti-inflammatory properties.

John Dawson Taylor (b1936) of Otago described to us, of a Danish migrant orchard worker who juiced the fruit and drank it every evening, and of a European lady who drives several hours to harvest Montmorency from an old tree growing in the South Island.

Our tree was gifted by Jean and her son Adrian Liner in memory of British born Philip Liner (1925-2019) who lived at Tawa and Johnsonville. He is the famed Radio NZ National broadcaster, compere, short film narrator and host of the ‘Roundabout’ radio show from 1975 to 1990. 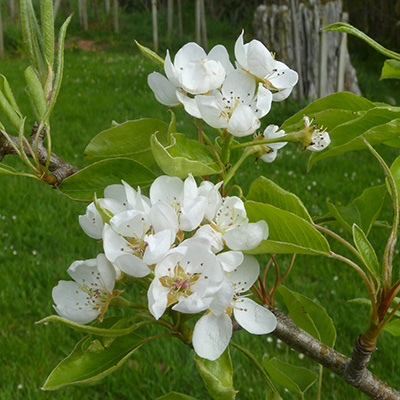 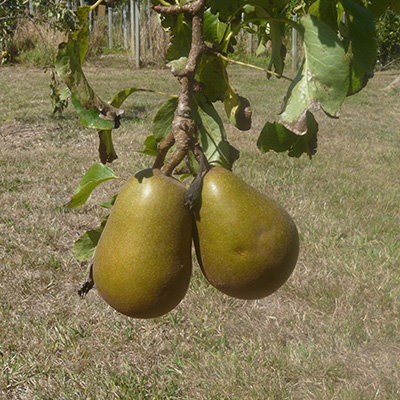 Brown Beurre. 1650’s.
The Brown Beurre was for a long time, considered the prince of pears in France, its native country. For those who are partial to the high vinous flavour - a rich mingling of sweet and acid - it has still, few competitors. 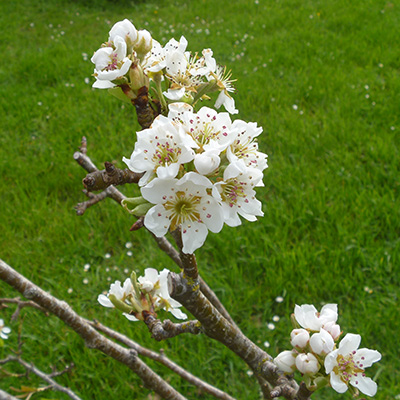 William bon Chretian and Winter Nelis.
Two pear trees grafted onto rootstock. William bon Chretian is often simply known as 'Williams'. The fruits of this superb pear turn yellow as the flesh ripens. It is an early fruiting variety producing large yellow non-gritty fruits with an excellent sweet and juicy flavour. This British bred pear is perfect for poaching and preserving, as well as eating fresh from mid to late September.

Winter Nelis was raised from seed by Jean Charles Nelis, Mechlin, Belgium, early in the nineteenth century. Introduced into England under the name of La Bonne Melinois. At a later date, the name Nelis d'Hiver was substituted. From this name came the English equivalent, 'Winter Nelis'. Fruit small to medium in size. Skin fairly thick, but tender. Flesh fairly fine except for grit at the centre. Buttery, moderately juicy. Spicy, rich flavour, rates very high in dessert quality. Late keeper. 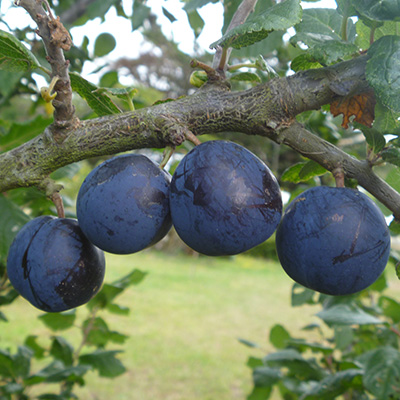 Greengage.
The original greengage, introduced in France in the sixteenth century, and named 'Reine-Claude' in honour of the King of France's wife. The small to medium sized fruit are green, or in some variants, greenish yellow. The flesh is a translucent greenish yellow, and the taste is pure nectar. It is one of the most refined and exquisitely flavoured plums there is. Most variants have a fairly high winter chilling requirement, and fruit poorly if at all in warm temperate areas. Mid-season. 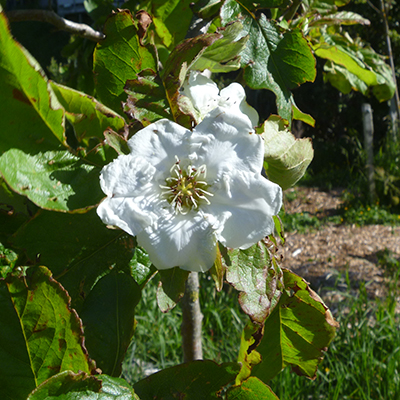 Medlar.
Medlar’s are ornamental flowering trees with pretty blossom and good autumn colour. The fruit is tart if eaten raw, but makes pleasantly flavoured jellies or can be used in desserts, or as a fruit paste on firm cheese. Left to soften or 'blet' the fruit mellows and is a traditional, if unusual, treat. In the United Kingdom this is a 'winter fruit' dating back to medieval times. It originates from ancient South West Asia and South West Europe. Max Dorset grew medlar at Ivy Bank Farm in Glenside and would blet the fruit in a bed of dried grass in the upstairs front rooms of his house. 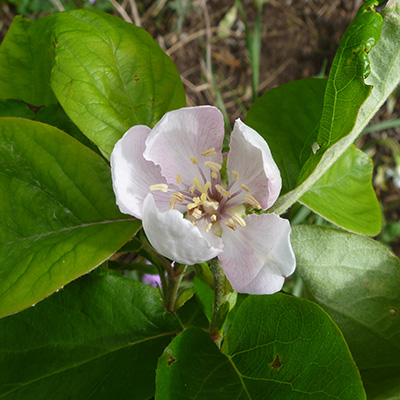 Quince.
This is the quince grown at the Brown Sugar Café in Taihape. Matures in February to March and is a self-fertile variety. The quince originates from ancient Turkey.