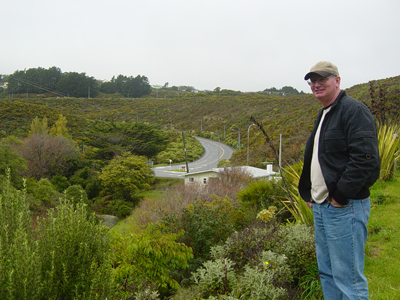 Keith Calder views the proposed route of the Westchester Drive extension, 10 May 2008

When Keith Calder was appointed harbour strategy coordinator with Porirua City Council, one of his first visits to the community was with the Glenside Streamcare Group.

Keith was shown Streamcare revegetation planting along Middleton Road. He visited the site of the planned route of the Westchester Drive extension to better understand the impact on the stream.

Keith’s role is to coordinate a strategy for taking care of the Porirua Harbour and Pauatahanui Inlet.

Prior to taking on this role he was valley manager at the Karori Wildlife Sanctuary.

He will liaise with groups such as: