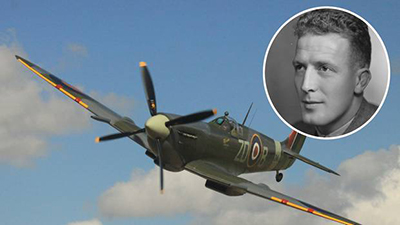 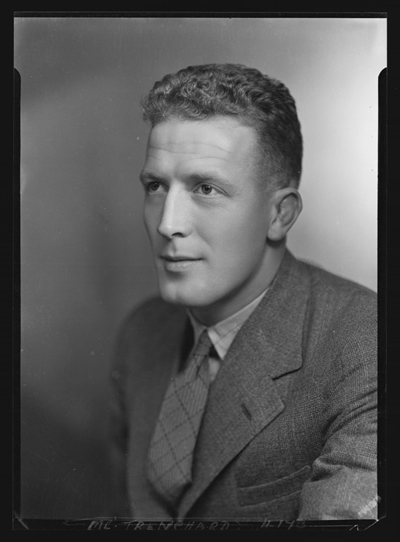 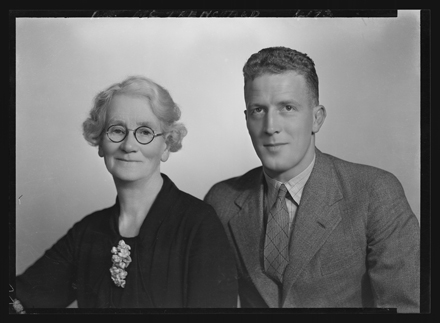 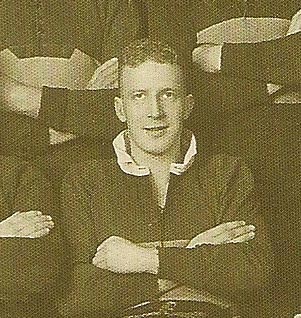 This article is written by Claire Bibby in memory of former Glenside resident, Horace Trenchard, a New Zealander in the Royal Air Force who died in active service during World War II.

In 1937 at the age of 25, Horace Trenchard was the guest of honour at a farewell party in Glenside. Horace was about to sail to the United Kingdom and take up a four year commission with the Air Ministry. At the time he was single. Former Glenside residents recall that his father had died before his birth and his mother was distressed at the thought of her only child, her husband’s name-sake, leaving home for armed service.

Horace joined the Royal Air Force and died on 29 February 1940 undertaking a night training flight at Duxford, Cambridgeshire, England when his Spitfire crashed. 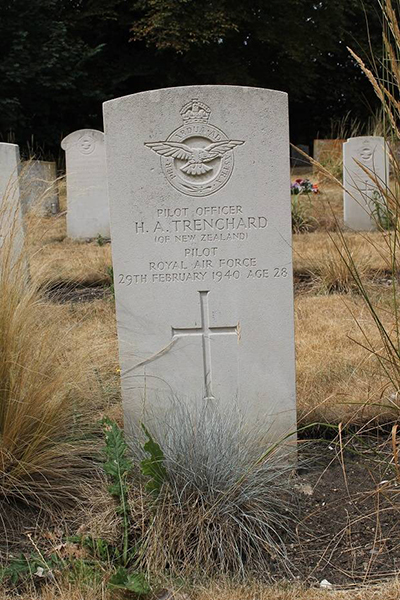 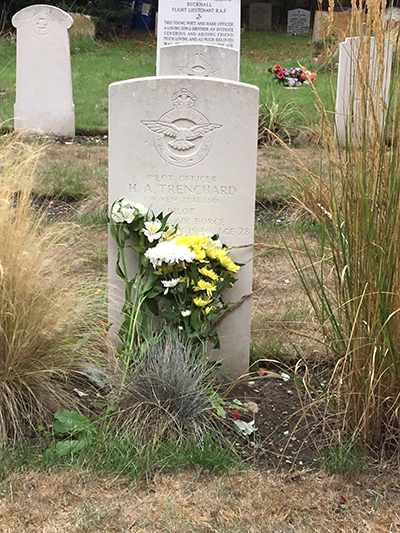 Photo's above and below: Dilip Sarkar MBE FRHistS BA(Hons) 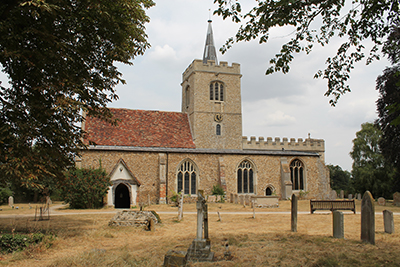 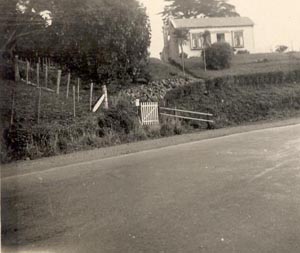 1937 Trenchard's home at the time it was purchased by Stebbings. Photo: Len Stebbings Collection

Some time after this the Trenchard’s came to live in the Johnsonville area, as Horace was enrolled at Johnsonville Primary School in 1919. It is known that the Trenchard’s bought a house on the main road in Glenside and lived there. This is now the address of 219 Middleton Road. The family became very close friends to the Stebbings. The year Horace left New Zealand to train in the Royal Air Force, the Trenchard’s house was purchased by Len and Mollie Stebbings to be their first marital home.

The following information is obtained from Horace’s application, in February 1937, to take up a Commission in the Royal Air Force. At the time Horace provides his address as Glenside, Johnsonville until March 30 1937.

1926-1930 educated at Waitaki Boys High School, Oamaru. Enrolled in the Cadet Corps, attaining the rank of Battery Sergeant. Captain of the College 1st XV Rugby team for three years. Took up boxing for two years and tennis for two years.

1930 returned to Glenside. Captain of the Johnsonville Senior XV rugby team.  Represented Wellington in the Senior Provincial side. (Len Stebbings said he played fullback for Wellington at the time Horace's cousin Jarman was suspended).  Member of the Johnsonville Tennis Club. Obtained his “A” flying licence. Trained by the Wellington Aero Club and the Wairarapa Aero Club.

Employed by the Wellington Meat Export Company as an assistance clerk in the Wool Department, preparing wool samples. (It would appear Horace obtained this work through his mother’s side of the family. Her sister married A G Jarman, who was the Manager of the Department). Left this employment after six years service to take up a position in the Wellington Harbour Board and undertook clerical work on the Export of Wool Shipping Specifications.

February 1937 applied for a Short Service Commission in the Air Ministry and left New Zealand for the United Kingdom on 12 July 1937, on the ship S.S. Rotorua.

Gwen Silvester lived in Glenside at the time Horace left New Zealand. She said that the community put on a big farewell for Horace, who was known as Horrie. It was held at the Pilbrow home on the main road in Glenside. This is now the address 271 Middleton Road, Glenside. It was a big event as Horace was very popular. Gwen described Horace as handsome and said he was "liked by the girls".

The late Murray Henderson described Horace as his school boy hero and said he was held in high regard by many school boys due to his popularity and being Captain of the Johnsonville 1st XV.

On 12 July 1937, Horace embarked from Auckland on the S.S. Rotorua for the United Kingdom.

He was granted a Short Service Commission for 4 years as Acting Pilot officer on probation in the General Duties Branch Royal Air Force, with effect from 24 August 1937. He was confirmed in his appointment and graded as a Pilot Officer on 24 August 1938. His postings were:

29 February 1940 - Whilst carrying out night flying training flight in a Spitfire fighter, crashed in the vicinity of the aerodrome at Duxford and received fatal injuries.

Buried in Whittlesford Parish Churchyard, Cambridgeshire in the section occupied by the Royal Air Force graves.

In the opinion of the Court, the cause of the accident was due to:
a) Loss of altitude when pilot changed over from instruments to visual flying, while turning to look at flare path    and beacon
b) Inexperience of pilot flying in “blackout” conditions.

(1) That the accident occurred 3 – 4 minutes after take-off.
(2) That a comparatively inexperienced night pilot when taking off in conditions of “blackout” with little or no horizon, can easily lose his sense of altitude.

(1) That dual aircraft be provided in all squadron carrying out night flying and at least two flights be given in      conditions of total “blackout”
(2) The pilots carry out dusk landings merging into moonlight for at least 3 hours
(3) That all aids to instrument flying be fostered.
(4) That a leading light such as a mobile beacon or money flares be placed 1 to 2 miles up wind and to the left of   the flare path.

The Air Officer Commanding remarked that he concurred with the findings and recommendations 1, 2 and 3 but said that in respect of 4, orders were already in existence for the provision of leading light and flares.

At the time of Horace’s death, Mrs Trenchard was no longer living in the North Island. She had moved to the South Island where she was staying with the Jarman family at Hororata, west of Christchurch. It was here she received a telegram of sympathy about her son's death from the New Zealand Minister of Defence, the Hon F Jones. However, the circumstances of Horace’s death were never communicated to his friends back home in the Glenside and Johnsonville area.

“We didn’t know what happened to him during the War. Nobody knew. Some said he had flu and was sent back to Scotland to recuperate. Some said his Gypsy Moth was shot down. It was a bit of a wonder. The next-of-kin were informed and it was up to them whether they told anyone else the details. If they didn’t want to talk about it no one knew what happened.”

Due to the uncertainty over the circumstances of Horace Trenchard’s death and to allow closure for his former friends and acquaintances, his War Records from the NZ Defence Force archives were obtained in March 2005. A copy of the précis of the War Inquiry was passed onto the Stebbings family.

An item in remembrance of Horace was published in the Glenside community newsletter in April 2006 and was well received by those who knew him or about him.

Horace Trenchard remembered in a book

In 2018, Dilip Sarkar MBE, a Fellow of the Royal Historical Society and prolific author, contacted the NZ Herald, and subsequently Claire Bibby, seeking information about the impact of Horace Trenchard's death. Dilip is writing a book about the casualties and survivors of the 19 Squadron 1938-41, the RAF's first Spitfire squadron.

Dilip e-mailed "My work is very much about the human experience of war and effect of casualties on those left behind, and, indeed, how this reverberates down the generations and still has currency today. It is sad that so many pilots like Horace were killed in flying accidents and are largely unknown."

On August 23, 2018, in response to a request from Claire Bibby, Dilip and his son James placed flowers at Horace Trenchard's burial site. They also placed flowers at the headstones of two other men of the 19 Squadron who are buried at Whittlesford Parish Church.

Horace Trenchard’s name is formally honoured in three locations. There are:

Friendship with the Stebbings family

Len Stebbings and Mary (Mollie) Hallewell were married in 1937. The Stebbings bought the Trenchard’s cottage and Len and Mollie lived there for several years until their new home was built up the end of Stebbings Road in 1942. After they moved into their new home, they sold the former Trenchard cottage to Bob McNair, a cousin.

Here are other Stebbings memories.

“The Trenchard’s were very good friends of our family. We always called him Horrie. We had a photograph of him, framed in the office at home for many years. Horrie was best man at the wedding of my parents in 1934.”

“The Trenchard’s were a Canterbury family. She [Mrs Trenchard] was a Jarman, and that’s where she came from. She was a life-long friend of Ethel Florence Stebbings through the Johnsonville Church, the Anglican Church.”

“I know two things about the Trenchard’s. Mrs Trenchard was my god-mother, and she died in 1959 aged 86. I know this as I have the death notice, which I shall send you. She died on August 10th 1959 at Wellington. The death notice was published in Christchurch because she came from there. It mentions a sister in Rangiora and a sister Mrs A Jarman of 66 Te Puke Street Titahi Bay.”