The originals are the plants that were in the garden before we began developing the heritage garden. They are the hardy enduring plants that survived when the garden was left to run wild. Due to their enduring nature, they are often considered undesirable and some have become nuisance plants or are considered weeds.

Monbretia is native to the grasslands of southern and eastern Africa. In New Zealand it multiplies rapidly, invades or naturalises wasteland areas and is difficult to eradicate. It was advertised for sale in New Zealand newspapers from 1900, although it may have been available before this. It cannot be ascertained whether it was planted at the Halfway House or is a garden waste escapee. It is located down by the stream and will be taken out as time and resources allow. 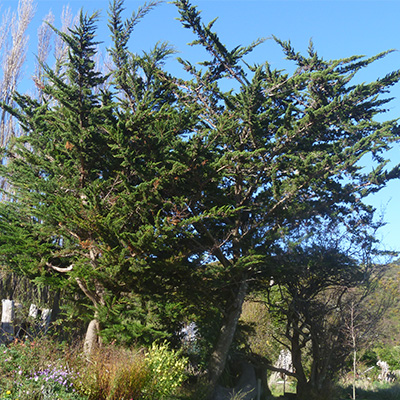 Macrocarpa are an iconic tree in the Glenside valley, first planted in the days of colonial settlement for shelter along fence-lines and around houses. The macrocarpa at the Halfway House appears to be part of an early rectangular enclosure surrounding a paddock.

The tree is a native to the central coast of California with the last remnant of indigenous naturally growing trees in the locality of the Monterey Peninsula at Carmal, California.

Creasey and Sarah Ann Broderick lived just up the road from the Halfway House in 1845. A few years later they left New Zealand for Australia and later for the California gold rush, arriving by ship in San Franscisco. They returned to their farm at the Halfway in 1856. In her book Wellington’s Heritage (2000, p. 85), author Winsome Shepherd asks the question “Did Creasey Broderick, obtain some seed from Monterey when participating in the Californian Gold Rush?” She also notes that Creasey’s brother-in-law, Thomas Drake, donated macrocarpa seed to the Wellington Botanic Gardens in 1874-75.

Cupressus macrocarpa were offered for sale by nurseryman William Hale in Nelson in June 1862. The tree appears to have been first advertised for sale in Wellington on 21 April 1870, when it was available at a public auction in a 300-plant lot. They may have been bought by  Mr R Donald of the Eden Vale Nursery and Tea Rooms at Karori, as a week later he was offering cupressus marcrocarpa for sale.

Macrocarpa throughout Glenside have become the natural habitat for ruru (the morepork owl). 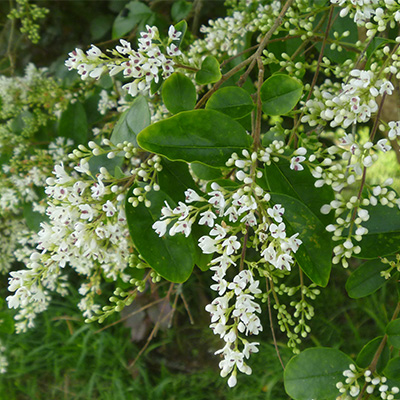 Privet originated in temperate and tropical regions such as China. It was brought to New Zealand from Britain and was for sale locally by 1850. Privet was frequently sold for use as a hedge and this is probably the reason for which it was planted at the Halfway. The leaves and fruit of privet are poisonous and today it is regarded as a weed, especially in forests where its rapid growth displaces native and other desirable plants and trees.

The Privet tree is in the oldest part of the garden, between the living macrocarpa and an old orchard cherry plum. It has a splendid twisted trunk, which is a feature. 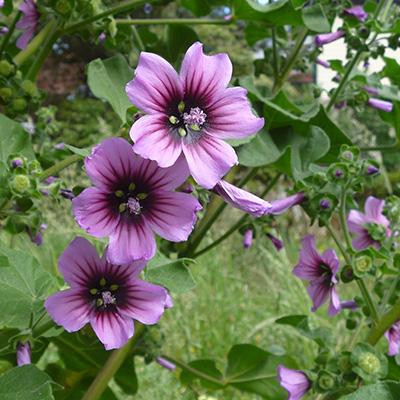 Mallow belongs to the Malvaceae plant family which includes okra, cotton and hibiscus. It is a biennial herb, with a single stem up to 1-3 m high.

Originally from countries around the Mediterranean, the mallow was introduced to NZ along with other medicinal herbs by early settlers from the 1840's onwards. It's likely to have been in the Halfway House grounds before the present house was built and may have naturalized from neighbouring farming properties.

Mallow has become an agricultural weed throughout New Zealand.

It can be found at the Halfway House along the horse paddock fenceline, in the orchard and around the living macrocarpa. It is favoured by bees.

Salix produce furry catkins or pussy willows in early spring. These trees come from northern Europe, northwest Asia and northern North America. Willows were for sale in New Zealand from the 1840s and were very popular for hedging, weaving and basketry. Some Salix have anti-inflammatory chemicals which are beneficial to horses and this may be the reason the tree was planted at the Halfway House. 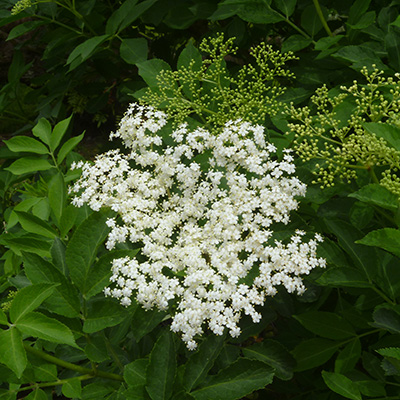 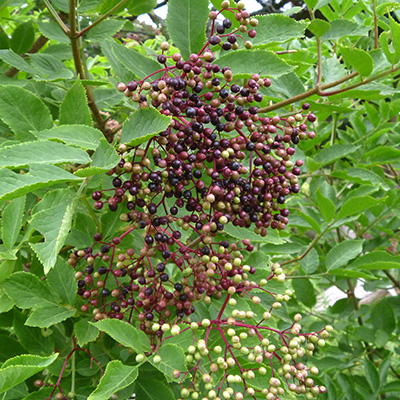 Elderberry is a small deciduous tree native to Britain. Traditional uses of Sambucus involved berries, seeds, leaves and flowers of component extracts. One popular product was elderberry wine which was brought to New Zealand with the early colonists and distilled locally from the 1870s, possibly earlier.

Elderberry was also used as a means of shelter and may have been planted at the Halfway for this reason. In 1904 the New Zealand Department of Agriculture added elderberry to the second, or optional, schedule of The Noxious Weeds Act 1900 leaving it up to individual Boroughs whether or not they declared it noxious. Several did so, including Otaki, but there is no evidence this was done elsewhere in the Wellington region.

Elderberry plants in the garden can be found around the living macrocarpa and along the horse paddock fenceline.