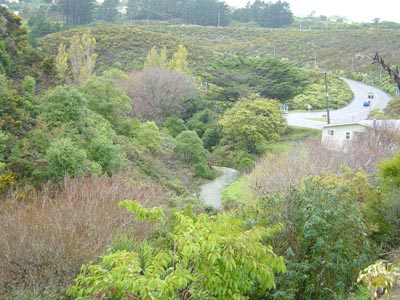 On 6th May 2008, City Council and Community met to discuss the impact of the proposed Westchester Drive road extension.

These notes are a summary of the meeting.

For future development up Stebbings Valley.

The Halswater Drive people want it built because noise and traffic associated with the Stebbings Valley development will affect them.

Council see that construction of the road will be more attractive for city bound and north bound traffic than Halswater Drive.

Planning for alternative roading between Stebbings valley and Tawa that would have the multiple benefits of spreading traffic movements, providing a different route for emergency services and directing traffic to an economic hub and the rail link at Takapu appears to have been put in limbo.

The road is unnecessary but being put through to appease some Halswater Drive residents.

As yet an indeterminate cost, possibly around nine million dollars and rising - for about 800 metres of roading.

As these houses are not yet built, Council cannot obtain development contributions to pay off the debt incurred for the road for years.

More money was needed to purchase land for landscaping the road and the adjacent Stebbings Stream beyond the roading corridor itself in order to produce an environmentally acceptable outcome. However, only the land required for the road was purchased.

The road to Grenada & Lincolnshire Farms developments was to be opened before Westchester but has been stalled. These developments cost less to the ratepayer and enable more housing and industry to be developed, thus providing a better cost benefit ratio.

The road would be a standard two lane road with a footpath on the stream side.

All the major cuts and excavation would be done from the Middleton Road end of the proposed new road.

The earth removed from the site would be 60,000 cubic metres. That’s more than 6,000 truckloads over two years.

The earth would be trucked along Middleton to Ironside road, to Ohariu Valley Road and dumped in a gully opposite McLintoch Road North.

The reason for trucking along Middleton Road is to avoid residential homes in Churton Park.

The whole road would take 12 – 18 months to build once Council has consents and design details completed.

There would be a plan for truck movements, dust and noise mitigation.

Not a sustainable development proposal.

The road doesn’t benefit Glenside yet Glenside residents will suffer permanent loss of amenity and value to their properties with its development.

Churton Park is perceived as having privileges based on wealth and influence.

If Churton Park residents want it, they should have to bear more of the cost for it including inconvenience during construction and a targeted rates levy since the wider Wellington community will gain no benefit from it. 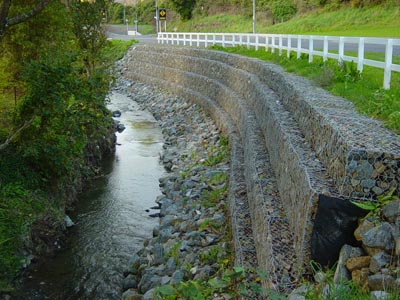 These rock gabion walls were installed along Middleton Road in 2006.

They are about hundred metres north of the proposed Westchester bridge crossing.

The cut and fill and rock walls

The road would be nine metres wide, cut into the hill. The cuts will generally be 2 metres vertical to 1 horizontal.

There are several areas where rock gabion walls would be created to hold up the road.

Some walls would be 30 metres long.

The stream would be diverted at Reedy’s bridge.

The eels under the bridge would be resettled in a temporary pond and an eel habitat reinstated. 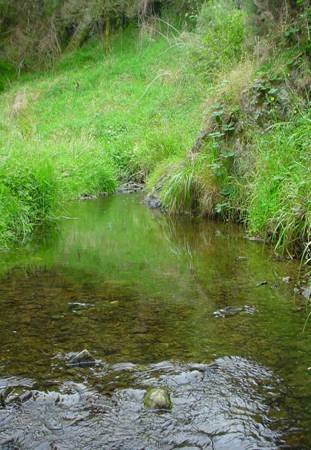 This part of the stream would be replaced with several rock gabion walls up to 30 metres long and 16 metres high.

Loss of visual amenity to residents.

Hills too steep to revegetate.

Past history of Council not following through on promises.

A bridge is proposed adjacent to 273 Middleton Road.

The area where the bridge is going is in a flood hazard area on the Wellington City Council District Plan.

The bridge would cross at grade from Middleton Road.

The bridge would take 3-4 months to construct and made with pre-cast concrete. It will be erected quickly once the drilling and supports are finished.

A contractor’s fence would be provided to separate the construction site from private property.

A second bridge is proposed below the Stebbings Dam face.

Unreasonable impact on elderly neighbours who have lived there since the 1950’s.

Where will contractors park during bridge construction as there is no room on Middleton Road, and it appears to us there would be no space on the working site area?

The community agrees that bridges are environmentally more acceptable than culverts. 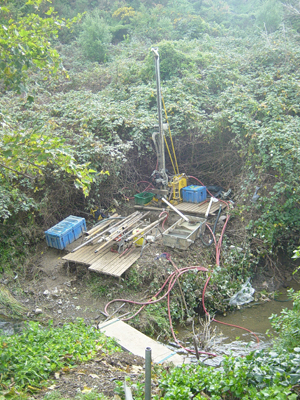 During the exploration there was a fresh (flood) that covered the platform with water. Some of the workers gear was washed downstream.

The home of an eel was filled with sediment when the drill head was lifted out and the site cleared. The eel has now moved out of this part of the stream.


Stephen Harte explained that the drilling on-site is part of a series of geo technical tests to provide information to design the bridge foundations.

Category 3V lighting is proposed (same as what already exists on Middleton Road).

Access is difficult across roundabouts for unaccompanied primary school children.